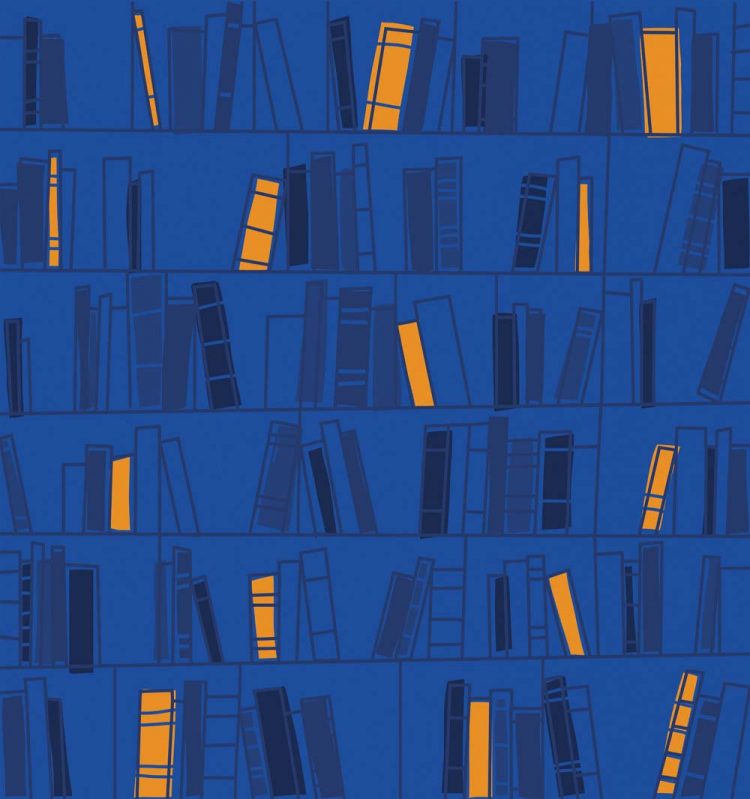 A monk that has spoken at Google on workplace happiness. An Emirati author that has written a searing, evocative portrayal of the father/son relationship in a Muslim community. A surgeon that has revolutionised eye surgery, with implications for entire countries.

These thinkers and leaders are not, perhaps, who you might expect to be speaking at a literary festival. But for the Emirates Airline Festival of Literature, which takes place from 4-9 February this year, unexpected has always been part of their genetic makeup.

“Every literary festival is unique in its own way,” says Ahlam Bolooki, the Festival Director. “What makes ours unique is one third of the world lives within a six hour radius of us, which means our festival is able to be as diverse as its community. Obviously, we are a non profit, so without Emirates being a title sponsor of the festival, we wouldn’t be able to fly in all the authors. If you compare what we do with other festivals around the world, we have so many global names in one place.”

Alexander McNabb is one of the local success stories. An expat to Dubai, living in the emirate has proved formative for his writing, seeing him publish critically acclaimed novel, Olives – A Violent Romance, Beirut – An Explosive Thriller, and most recently, Birdkill. 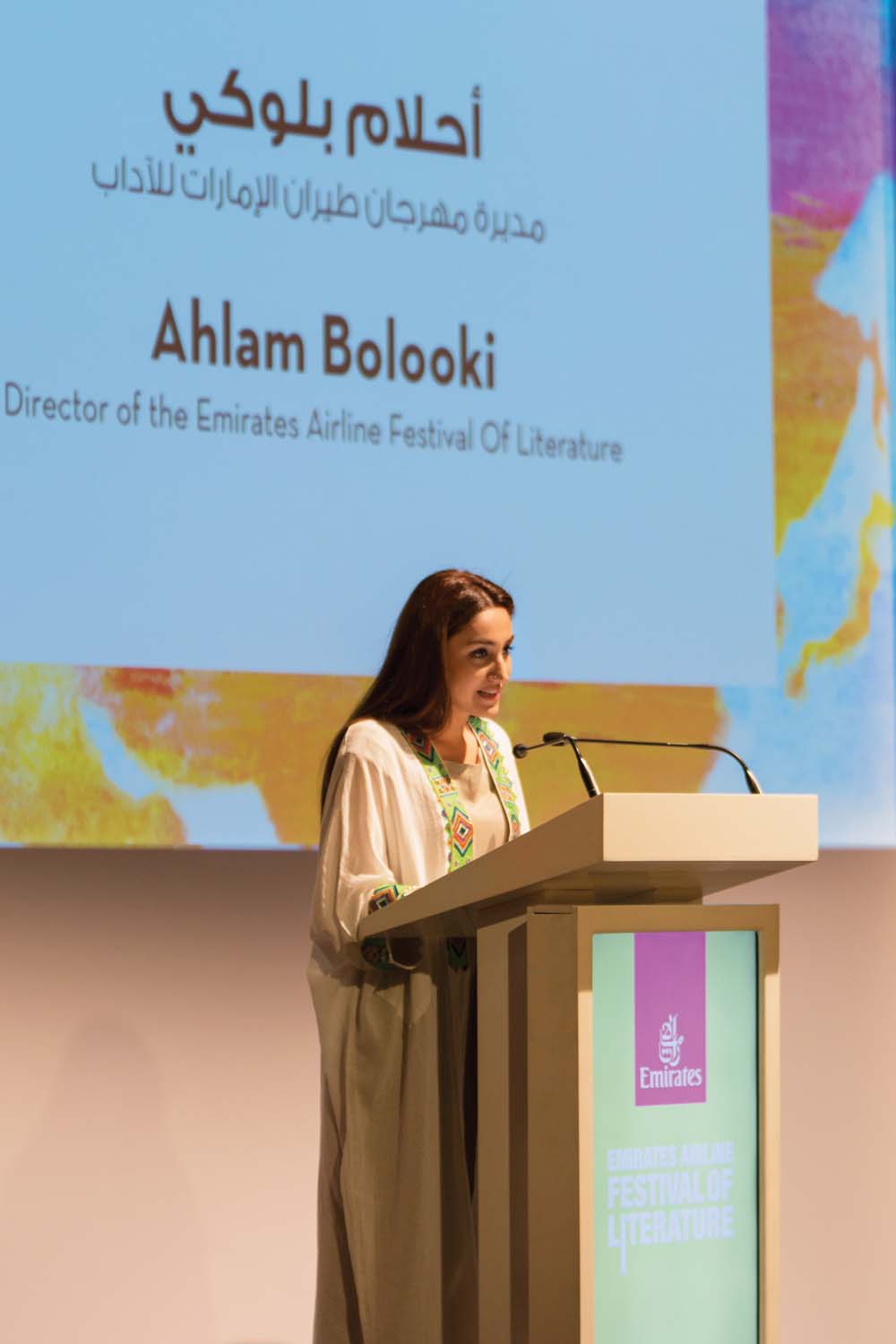 “The reality of the scene is changing, and a lot of that is down to LitFest itself,” he says. “It plays a tremendous role in bringing local authors to the fore, and celebrating the relationship between authors and readers. We’ve had big book events, but they’re very much more trade fairs, about selling books. When it comes to talking books, sharing books, enjoying books, having access to books, it’s what’s made it unique. It played a huge role in expanding the local fiction scene.”

“Speaking from the festival’s perspective, it’s been running for 12 years now, and through the evolution of the festival there’s so many things that have changed,” adds Bolooki. “For example, it’s gone from us seeking out authors to us now being contacted, it’s the other way around, it’s a place where now the festival has established itself as a sort of platform for the region so you see a lot of local authors, when they start writing, it’s a king of goal for them to be launching a book at the festival, or being able to take part and speak at the festival alongside all the global names that come here. It’s been amazing to have been able to give them that platform. It’s just opened so many doors for the region.”

The addition of an increasing number of local authors has also proved welcome to the scene. “What we’ve tried to do more and more over the years is to bring Middle Eastern, Arab and Emirati voices and have them on panels with other voices,” she adds. “You will never see these people in this setting ever again, so if you miss that talk then you’ve missed it for good!” 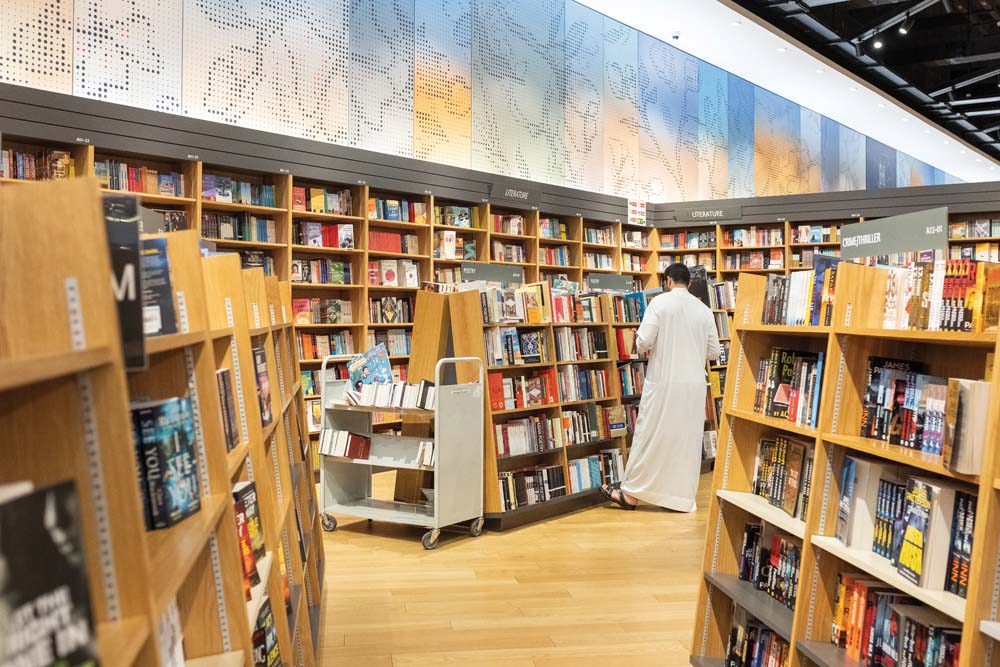 Bolooki quickly rattles through some of the 60 Emirati authors involved in one way or the other with the festival this year, including regular names such as slam poet Afra Atiq, to Dr Habib al Mulla, one of the biggest lawyers in the country who has written about restaurant culture around the world.

The resurgence of a literary scene is down to a few factors. Some of it is government-led; an initiative was launched in 2016 to refurbish the entire Dubai Public Library network, with the plan supporting the UAE National Strategy for Reading. The pilot project was the revamp of the Al Safa Art & Design Library, which originally opened in 1989. Redesigned with masses of natural light, it now serves as a benchmark for all public libraries in the emirate.

But one motif that authors or local members of the community regularly pinpoint on is the evolution of how people are living in the UAE.

“A lot more people now are writing books in the region,” says McNabb. “Time has had an effect, too. People have put down roots here, they’ve invested in real estate, they have a much more long term view of life, there is much more room for culture to grow and flourish whereas previously you just did two years and then went home. I think there’s now more people with more time on their hands and more inclination to enjoy their leisure a bit more, and so I think that slightly slower pace means you’re less focused on making money and more focused on a more rounded view of life.” 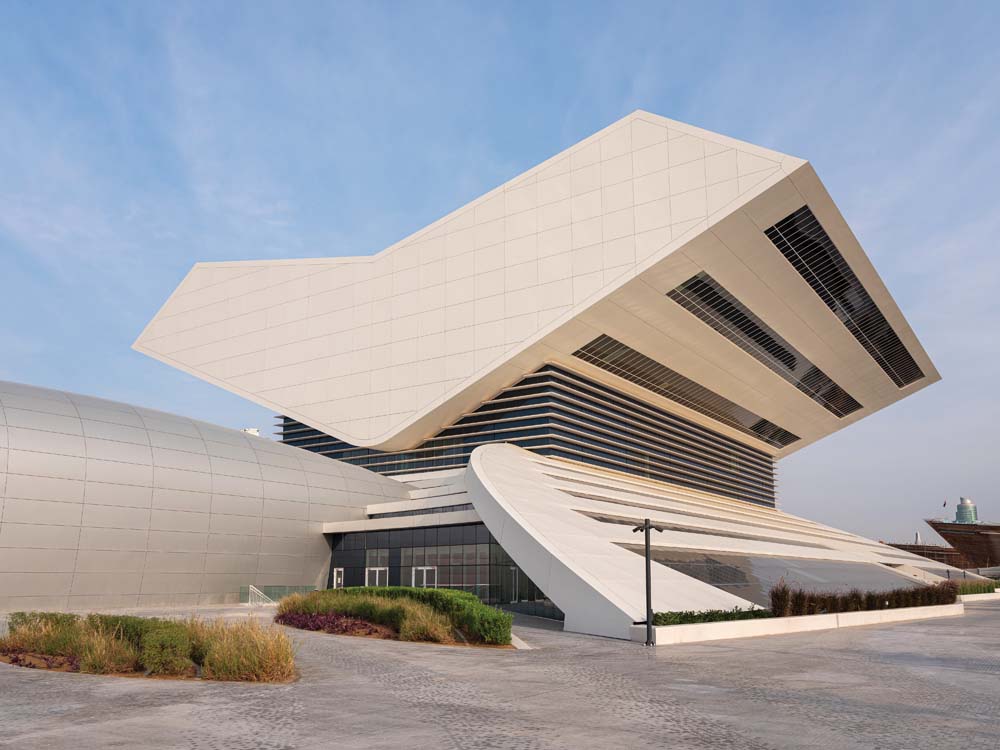 Since McNabb’s first novel was published in 2011, he has seen people bed down here and the literary scene feed itself in a virtuous cycle. “LitFest turns people onto books and because there’s more celebration of books, more people are telling stories and then there’s more local faces to be found.”

The festival has been a stalwart of the scene: many growing up alongside it, many seeing perceptions being altered by it. Says Bolooki: “Before I joined I would attend, I would moderate talks, so it’s been a journey for me. To me, the festival is a one week crunchtime where you have – it’s sort of like hundreds of life lessons crammed into one place, and that’s when I would take time off in general and just book myself into the festival.” Whether you know the author or not, just pick a topic you’re intrigued by and go along for the ride, she advises.

“You will often be surprised, even if it’s a small session with just 30 people in the room, there’ll be conversations that readers and non-readers can benefit from. Even if you haven’t picked up a book in the last ten years, there will be conversations about things that you’re interested in. There’ll be things about family dynamics, relationships, sports, food, travel, and fiction and crime and true crime – there will be something!”

Rehan Khan is the author of A Tudor Turk (2019) a historic fiction, described as Mission Impossible in the Sixteenth century, as well as the Tasburai fantasy series. He describes one of his favourite parts of the festival as seeing international authors with no prior knowledge of the UAE become enthusiastic advocated for the country. 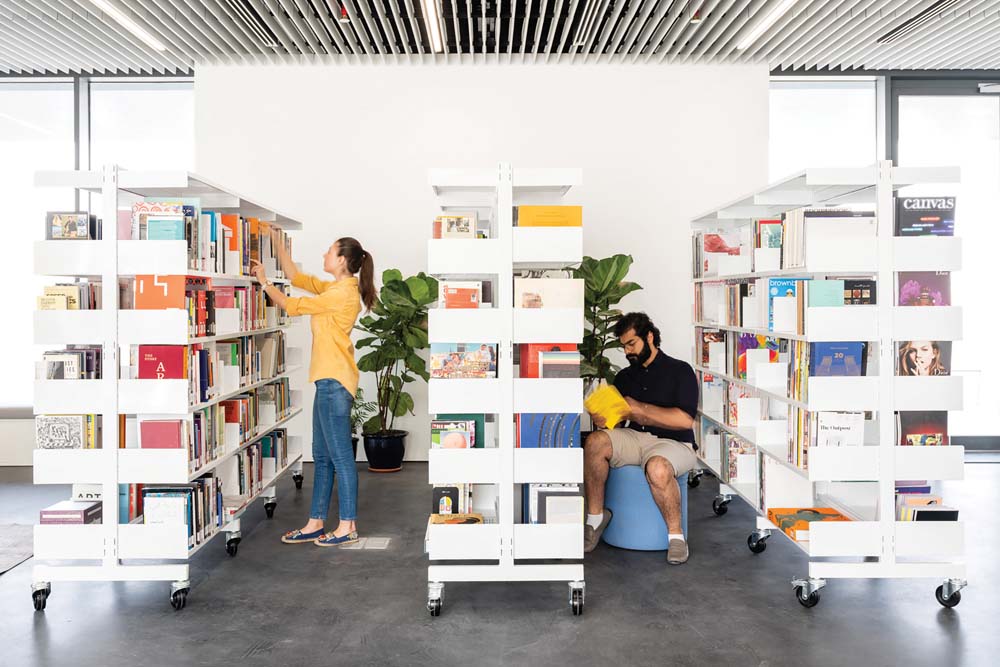 “I took a fantasy author from Northern Europe down to Kite Beach, after I heard he wasn’t planning to do anything apart from stay in his hotel, go to his panel and then leave,” he says. “As soon as he got out onto the boardwalk and saw how busy it was, how people from every walk of life were co-existing to enjoy the weather, he was amazed.”

“Historically, we see quite clearly that culture happens only in times of plenty,” says McNabb. “I’d argue that the first recorded narrative is that on the walls of the caves of Lascaux, where the story of the hunt is retold in cave drawings because the people who created them had full bellies as a result of the hunt that they depicted so colourfully. In the history of the Emirates we also see that societies living hand to mouth had no resources to expend on the frivolity of culture as they were too busy surviving – and often marginally, at that.”

But later, as societies evolved and a merchant class emerged, artefacts emerged that went beyond the essentials of weapons and containers. We have seen something of the same process in the modern Emirates, he argues. “We have moved beyond the existential concerns of the 1970s and that period where everyone was focused on purely creating wealth, to a society where people have the material means and freedoms to be able to afford to create – you could argue that this is a symptom of a maturing society that is achieving happiness.”

For Khan, his inspiration comes from knowing that this is a city and country that – despite its preconceptions – has a rich and tapestried history. “When you go down to the old towns and look at the way they’re designed, they’re so designed for the environment we live in particularly in the summer, those low rise and low tech solutions that people have… as a writer, it makes you stop As you walk down those alleys and put your hands on the walls and feel that elemental history there and think, there is so much richness here, how many people have passed down this passageway. What were their stories? What were their experiences? Their hopes and aspirations? Their journey has finished now, but we are here. Those places in the UAE, or Oman, or Hatta, I always tend to stop and think about that, who were the people that passed through before me. Am I doing something to honour them?”

Take in the public art and then browse one of the esoteric tomes whilst sipping on artisanal coffee. Views of the Creek won’t cost you extra.

Behind Dubai Snooker club is a hidden gem – with an overflowing library and lively discussions, this is the place to come if you’re desperate to discuss a particular book.

In the middle of Sustainable City, an eco community in Dubai, is a café that specialises in vegan, sugar free, gluten free deserts – and also has a small library to borrow from. 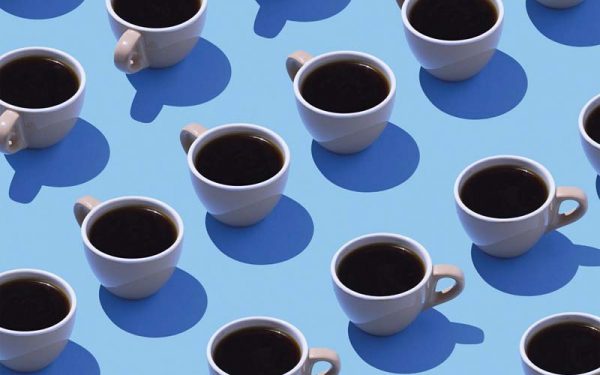 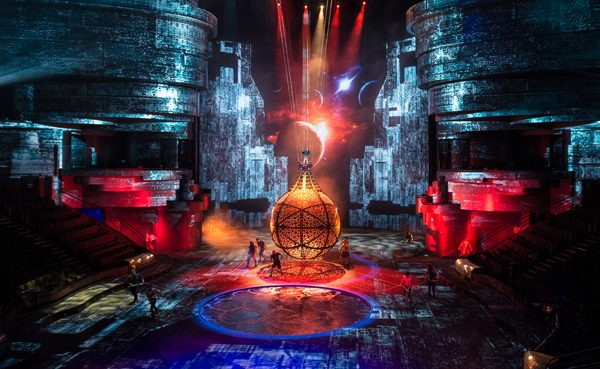