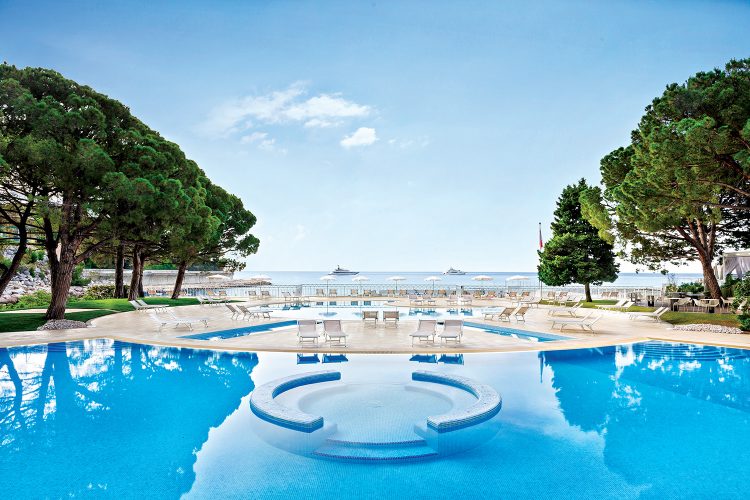 On a balmy evening in Monte Carlo, I find myself swaying in the sand to the sound of a Bossa Nova beat as gentle as the breeze. I can’t remember the last time I danced at a party but there’s something about being on the French Riviera – where the jet-set lifestyle still thrives – that immediately transports you to a more romantic era. And it seems like I’m not the only one. As the sun sets over Le Méridien Beach Plaza’s rows of yellow-and-white-striped umbrellas, I watch a group of glamo

rous guests play backgammon and slurp down oysters. The scene could very well be something out of a Hollywood Golden Age film, until you spot Russian billionaire Andrey Melnichenko’s futuristic superyacht in the distance. Or realize that the live band, Nouvelle Vague, is singing a cover of Kylie Minogue’s “Can’t Get You Out Of My Head.”

Next to me French photographer, illustrator, author, fashion blogger and overall bon vivant Garance Doré is also swaying to the beat in head-to-toe crisp white. Doré was born in Corsica and spent her formative years in France before moving to the United States.

“I learned very early about the art of living, taking it slow and appreciating quality,” says Doré about her upbringing in the South of France. “There is definitely an attraction to a slower style of vacation. We’re living in a time where people want to shift away from crossing things off their list and move towards traveling to find moments.”

Arguably, there’s no better place to do this than Monaco, a sovereign city-state where the main draw is enjoying the good life from an optimal vantage point – be it beachfront party or a scenic drive in a vintage sports car. Aside from a few key landmarks, a trip to Monaco isn’t about crossing touristic sights off your list, but rather slipping into a pace of life that hasn’t changed much since the 1960s.

“The Côte d’Azur is a place that really developed during this time. That’s when leisure started. That’s when people started going on vacations inspired by beautiful images by photographer Slim Aarons,” says Doré.

Thanks to the opening of the country’s first casino, Casino de Monte-Carlo, and a railway connection to Paris that sprang up in the late 19th century, Monaco quickly became the playground of the wealthy that it is today. Currently, about a third of its population are millionaires due to the principality’s well-known reputation as a tax haven. High season for travel kicks off in May, when the city hosts the Monaco Grand Prix, one of the original street circuit motor races of Formula One. For those that would rather enjoy the slow life, spring and late summer is an optimal time to soak in the French Riviera’s relaxed atmosphere. Plus, you can always get a high-octane thrill by touching down via a helicopter from the Nice airport or cruising through the hills in a vintage sports car.

The latter was just my speed, and I was eager to heed Doré’s key piece of advice: “take a car and go through the small villages; that’s where you find treasures.” Little did I know one of the gems would be my ride, a vintage Rolls Royce Corniche that draws its name from the famous coastal roads that run between the sea and mountains of the French Riviera, toward Italy.

Winding up the Grand Corniche, the highest of the three scenic routes, I can’t help but think of the icons that have done the same. The road was featured heavily in Alfred Hitchcock’s 1955 film To Catch a Thief (starring Cary Grant and Grace Kelly) and long before that, it was built by Napoleon.

“Don’t take any photos yet, the best view is coming,” says my driver before I can even snap a shot. A few minutes later, we reach a viewpoint where the tiled roofs of Èze, a village first populated in 2000 BC, and the Alps are visible in the distance. Apparently, Walt Disney spent quite a bit of time soaking up the magic of the town and its expansive view of the Mediterranean Sea. On a clear day, the water almost appears to merge with the sky, forming an abyss of blue interrupted only by white yachts and the rugged coastline.

Back at sea level, our glamorous drive leaves me curious about Grace Kelly’s connection to the region. The late actress and Princess of Monaco was instrumental in shaping its allure. Venturing out, I stroll down Avenue Princess Grace and stop at the Japanese Garden. Kelly, who loved Japan, wanted to make a Japanese garden in Monaco. After she passed away in a car accident in 1982, her husband, Prince Rainier, fulfilled her dream by opening the garden.

From the Théâtre Princesse Grace, I look out at the harbour where the two royals set sail for their honeymoon on the Deo Juvante II, a yacht now being used as a touring ship in the Galapagos Islands. Of course, a visit to Monaco isn’t complete without visiting The Rock of Monaco, a 62-metre-tall monolith representing the oldest of Monaco’s four corners. Nearby the Old Town, you’ll find the Prince’s Palace, now home to the current monarch, Prince Albert II and his family, and the Saint Nicholas Cathedral, where Rainier and Kelly wed in 1956. Today, Kelly’s philanthropic spirit lives on through La Boutique du Rocher, a store that she opened in 1966, which carries local Monégasque and Provençal crafts and donates its proceeds to children’s charities.

As I wander out of the store and through the streets of Monte Carlo, I find myself admiring the area’s elaborate classic architectural style, known as Belle Epoque. Famed for it decorative elements including ornate pinnacles, balconies, turrets and colourful ceramics, the aesthetic blends French, Italian and Spanish influences to create Monaco’s signature expression of luxury. Prince Rainier famously banned the development of high-rises after the 1970s, though this legislation was struck down by his successor, Prince Albert II, to make way for modern condos.

Further changes are on the horizon, as the city-state plans to expand its coastline by 15 acres to make room for Portier Cove, a new district near the casino. The current population of 38,000 barely fits onto its landmass of two square kilometres, where you’ll find the world’s most expensive real estate. According to a 2017 Knight Frank Wealth Report, US$1 million can buy a diminutive 17 square metre space in Monaco, compared to 30 square metres in London or 162 square metres in Dubai. The new US$2.3 billion dollar expansion is set to be complete in 2025 and will house up to 1,000 residents in luxury villas and condos including one designed by Italian architect Renzo Piano.

This isn’t the first time Monaco has artificially grown. In the 60s and 70s, Prince Rainier expanded the coastline by 20 per cent. But as is the case with many things in Monaco, history often repeats itself. For now, the principality hasn’t fully eschewed its storied past. You can still people-watch from the terrace of Café de Paris Monte-Carlo or listen to live piano while dining on spaghetti alla bottarga at Sass Café. Above all, you can head out into the deep blue abyss – by way of superyacht or morning swim. As the balmy breeze passes by, you might even hear the sound of a Bossa Nova beat and be moved to dance.