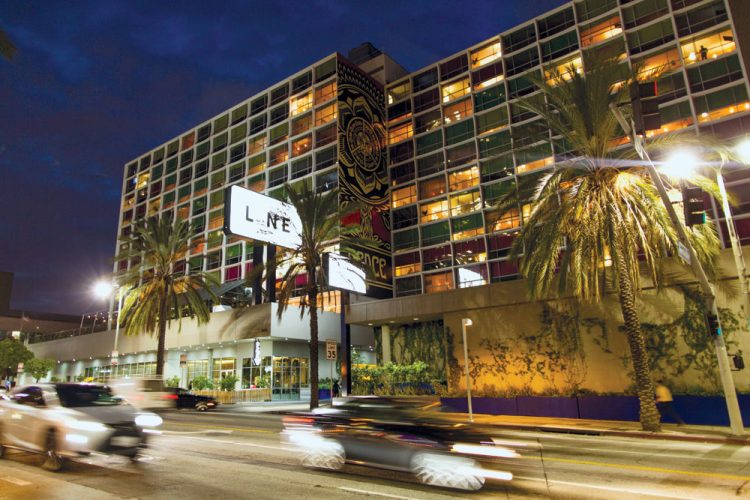 Formed in the 1970s and ’80s by Asian immigrants, Koreatown is not only home to the largest Korean population in the US today, but also LA’s most buzzed-about openings. The recent influx of chef-driven restaurants, boutique hotels and (hidden) nightspots has drawn a new wave of visitors. Moreover, a central location, between downtown LA and Hollywood, makes it easy to reach by metro or by car. Just don’t expect to end the night with karaoke, because round-the-clock spa complexes await, inviting you to soak, scrub, and snooze until you’re ready to tackle the scene all over again.

Koreatown’s popularity surged thanks to Korean American chef Roy Choi. Two years ago, he opened four dining spots – Commissary, POT, POT Lobby Bar, and POT caFe – in the LINE Hotel, situated in the heart of Koreatown. About Choi: he’s an alum of the Culinary Institute Of America who sparked the food truck movement with Kogi BBQ nearly a decade ago. After opening several restaurants around the city, including A-Frame, Alibi Room, and Chego!, he started LocoL, a chain that sells affordable, healthy fast food in under-served communities. Back to the LINE: Commissary’s vegetable-inspired menu is served in a greenhouse by the hotel pool; POT caFe proffers sweet red bean buns; and POT restaurant dishes modern Korean creations like duck confit fried rice with poached egg. POT debuted on Los Angeles Times’ Top 101 Best Restaurants list in 2014. In April 2016, Choi made Time magazine’s 100 Most Influential People.

Hang out in POT CaFe, located in the lobby of this industrial-chic hotel, to feel Koreatown’s buzz. The Hollywood Hills rooms overlook a sprawling metropolis backed by the legendary sign in the hills.

Modelled after South Korea’s jimjilbangs, Wi Spa is a multi-storey bathhouse replete with gender-segregated hot baths, whirlpools, showers and a series of saunas: dry, clay, ice, jade, salt and steam. Inhibitions are best left with your shoes – at the door– before entering a world of soaking, steaming, and scrubbing. A 90-minute full-body buff and aroma massage will not only leave you squeaky clean but as limber as a noodle. Other available treatments include acupressure, deep cleansing facials and Swedish massage. Afterwards, put on your spa-issued cotton outfit and head upstairs to the co-ed communal area, where spa goers lounge, socialise and watch TV on floor mats. An adjoining cafe serves traditional Korean dishes such as kimchee fried rice, hot stone bibimbap and spicy tofu soup, or simply cool down with a mochi-topped shaved ice. There’s also a computer area, a children’s zone and a library. In true Seoul style, Wi Spa is open 24/7.

Walk through the Normandie Hotel, past The Normandie Club, until you see a black door crowned with a little red light: this is the not-so-secret hidden entrance to The Walker Inn. Opened in spring of 2015, the bar accommodates seven people at the sleek counter and 20 in the parlour-like lounge – all of whom come here for the artisanal cocktails. Either choose from the classics, or opt for a themed option. Currently, ‘An Homage To Alice Waters’ – Waters is a prominent American chef and food activist who pioneered Californian cuisine – offers seasonally-inspired tipples such as Fennel From Farm To Glass, and Arugula Greens, which combines pisco, tequila, rum and lemon. Reservations are encouraged, but you can walk in, and with any luck, chance upon some seats. That said, wait times can be over an hour. And in another twist, the bar is only open from Wednesday to Sunday.

For K-Pop and classic Korean karaoke head to Palm Tree LA and stage your own concert in a private booth.

“Prince performed at The Wiltern on May 30, 1986, during the Parade Tour,” reveals Silvia Carluccio, the theatre’s assistant general manager. That one-off show, held 30 years ago, had been announced just one day prior, and sold out in minutes. Impromptu or not, big-name acts continue to be drawn to this 85-year-old performance venue. Ever since Live Nation took over operations, David Bowie, The Rolling Stones, Lady Gaga, Tony Bennett, Lana Del Rey, and Elton John have graced the stage; in February 2016, tickets to Adele’s surprise show were the hottest item in town. That this Art Deco jewel had to be saved from demolition not once, but twice, in the 1970s is a lesser-known fact. Its stunning green façade, 12 storeys of stepped cut-outs and silver geometric patterns, commands a distinct presence from the corner of Wilshire Boulevard and Western Avenue. No prizes for guessing how the theatre got its name.

For more than 30 years, this restaurant has made its own tofu, mixed it with combinations of kimchi, meat, seafood, or seaweed and created a fantastic spicy soup.