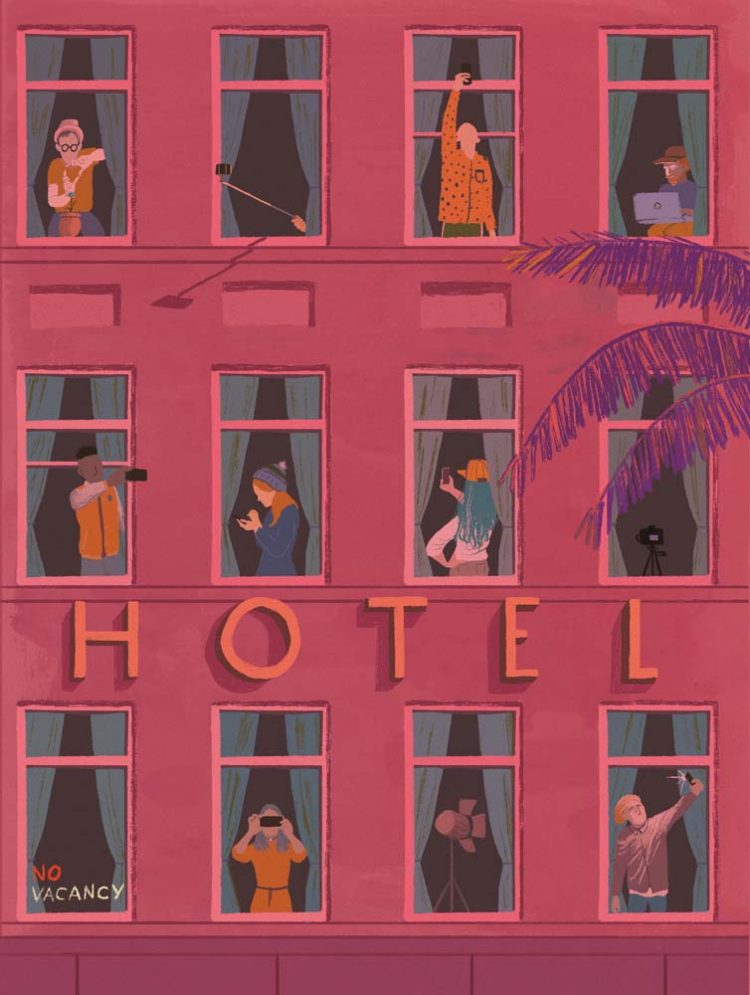 Azure waters. Deep blue skies. An attractive young lady gazes wistfully into the horizon. The caption reads: “Current mood.” The picture gets more than 50,000 likes and 500 comments, and the young lady pictured gets US$1,000 plus three free nights (plus flights) at the hotel she includes in the picture. Welcome to the world of luxury travel influencers.

This is a world where ‘content’ is a picture of someone staring out to sea with the caption #SunsetVibes. It’s also a world that luxury hotels are struggling to get to grips with, inundated with influencer requests to stay at their properties. And it’s a world that most of the rest of us are left scratching our heads over.

“When you think of an influencer, you most likely picture a 20-something model promoting flat tummy tea or vacationing in Tulum,” says Jack Bedwani, co-founder of The Projects, an influencer style agency which has worked with brands such as Samsung, Mercedes-Benz and GQ. “The term has exploded and almost become frivolous in the way ‘hipster’ did a decade ago. Culture has latched on to the term influencer, most likely because it’s easy to hate on. In reality, the label has grown to encompass a spectrum of individuals who have an ability to shape attitudes and behaviours, not just wealthy kids at music festivals,” he says.

The fact that influencers have exploded into the mainstream is reflected in the eyewatering figures that are being paid. Most medium-sized influencers (100,000 followers) can charge $1,500 and up, as well as business class flights for them and their photographer (along with separate rooms). It’s a world where the line between marketing, PR and editorial is getting increasingly blurred, and one where individuals with a smartphone and a good eye are becoming publishers in their own right.

Instagram was originally launched in 2010 to be a check-in app, then pivoted into a mobile photography sharing application now valued at $100 billion. It has more than 800 million users around the world, and undoubtedly has reshaped the way we consume photography. 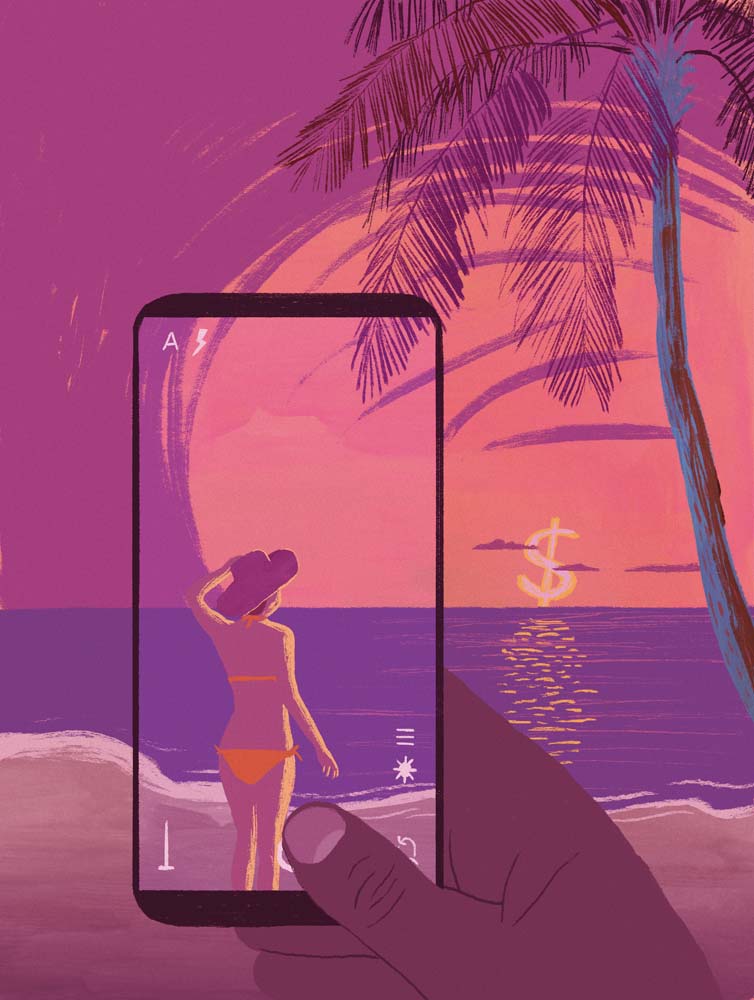 Parallel to the rise of Instagram has been systemic changes in advertising. The rising investment by brands into influencer marketing is in direct correlation to the popularity of ad blocking software. Advertising has changed from an interruption into something supposed to be enjoyed. First came ‘paid posts’ on blogs, and this ‘native content’ also spread to newspapers and magazines. Clever, ‘viral’ advertising works – word of mouth can drive sales between five to 200 times more than paid advertising.

For wannabe influencers, part of the appeal lies in the low barrier to entry – all you need is a smartphone and an internet connection. Anyone can set up an Instagram account and start posting photos. There is no agreement on what constitutes an ‘influencer’, although most have 50,000 or more followers. And it’s partly the lack of awareness of what constitutes a real ‘influencer’ that has caused controversy, particularly within the hospitality industry.

Last year a Dublin hotel owner hit back at one influencer who contacted him looking for free accommodation in return for coverage. The post, written by the Charleville Lodge’s owner, Paul Stenson, which ironically enough, went viral, included the following: “If I let you stay here in return for a feature in your video, who is going to pay the staff who look after you? Who is going to pay the housekeepers who clean your room? The waiters who serve you breakfast? The receptionist who checks you in?” He is not the only hotel owner exasperated by this new breed of writer. The New York Times recently reported that the Jashita Hotel in the Mexican beach resort of Tulum also banned influencers. It faced so many inquiries from influencers over the past six months, it no longer works with them.

“Yes we are annoyed – to be honest with you,” Abigail Villamonte, the front desk manager told the paper. “Because they don’t even write about it. They just post one picture.” And that just leads to more requests from influencers, she said. Thousands of miles away on the Philippine island of Siargo, a similar story played out. Gianlucca Casaccia, the co-owner of the White Banana Beach Club decided he had enough of influencers messaging him looking for free accommodation, so he posted a message on Instagram. “We are receiving many messages regarding collaborations with influencers, Instagram influencers. We kindly would like to announce that White Banana is not interested to “collaborate” with self-proclaimed “influencers.” And we would like to suggest to try another way to eat, drink, or sleep for free. Or try to actually work,” he wrote. That post went viral, but Casaccia told the New York Times he is unrepentant. “We found this disrespectful.” It didn’t help that many of the mails came from people with less than 2,000 followers. “How can you help me if you are no one?” he asked.

But are we in danger of throwing the baby out with the bathwater? Media is changing and where once a travel journalist would have stayed and written about a hotel, now influencers do it. The best type of collaboration is one where both parties get what they want: the influencer gets content (and a payday) and the hotel gets more bookings from the influencer’s followers.

“Influencers do often get a bad rap – often because the only time one makes the news, it’s for bad reasons,” says Kate McCulley, who blogs at AdventurousKate.com.

“You never hear stories about professional influencers doing quality work and leaving all sides satisfied because, frankly, that isn’t news. The other reason why influencers often get a bad rap is because there is no barrier to entry. Many people think they have what it takes to be an influencer, but they have no idea how poor their work is. And unfortunately some brands have no clue what to look for in an influencer so they hire someone poorly suited for their brand, they get little return, and they label all influencer marketing as bad.”

Indeed, anyone can set up an Instagram account, post a few photos, buy some followers and declare themselves an influencer. So, should brands be more careful about who they trust?

The Projects’ Jack Bedwani believes that brands need to shift perceptions. “Beyond the opportunistic behaviours of a few, we think that it’s more important to look at relationships with creators as mutual value propositions,” he says. “A good influencer deal should work for both parties, and the hotel should be clear up front on what they would like out of it. If you treat influence marketing as a transaction instead of a collaboration or partnership, you will be more likely to run into these [problems]. Influencers have their own perspectives, pursuits, and ambitions in building their brand. If you allow them to contribute creatively and invest themselves emotionally in the project, you will see a better result. It’s all about finding common ground and areas where their passions intersect with the brand.”

That said, tracking ROI is vital, and something many hotels still haven’t got to grips with. “Measuring the ROI is still a discussion topic within the industry,” says Jumeirah Vitavelli’s Director of Marketing, Tina Dotzauer. “There are various ways to track influencer impact, such as creating a special offer code that will be posted on the influencer’s feed, comparing engagement on our own platforms pre-, during and post-influencer stay, and simple things such as the number of booking inquiries we receive through social media. Not all inquiries will lead to bookings, but a smart reservations team can also track your conversions if they tag each inquiry correctly. In general, it is much easier to identify ROI on online platforms than it is on print.”

That’s echoed by Carissa Nimeh, the Chief Marketing Officer of Soneva, another five-star Maldives resort. “We keep an eye on daily website visits and whenever there’s a spike, it generally means that a big article has come out in a publication, or something has gone viral on social media,” she says. “Whenever this happens, there is almost always activity in the sales funnel. When the video of our new Mushroom Cave Lunch at Soneva Kiri went viral on Tastemade [a travel and food video network] last year, it made a relatively new experience become hugely in-demand. Now most of our guests ask for it,” she adds.

Tracking ROI is one thing, but every hotel takes a calculated risk when agreeing to an influencer stay. A study by data marketers Warc revealed that hotels are right to be wary. “The value of using social media influencers in this context may be limited to younger travellers, and even then the resort may not benefit directly,” the report said. It also revealed that Instagram exposure worked better for destinations in general and not for specific businesses such as hotels.

A sole focus on follower numbers doesn’t always work, however. As Bedwani says: “It’s equally important to remember that reach isn’t everything and that we are looking to engage with the right people, not all the people. While a swimsuit model may seem like an obvious choice to gift a new line of swimwear, her followers could easily be 85 per cent male, meaning she isn’t actually going to be selling a lot of bikinis.”

According to travel blogger McCulley, brands should also look beyond Instagram. “If I were on the PR side for a hotel or travel company, I wouldn’t focus exclusively on Instagram – only as a complement to written content on the web that lives forever in search engines. Blog content works; I’ve sent dozens of readers to Emilia-Romagna, Italy, and Koh Lanta, Thailand. Through my site, thousands of people have booked hotels I’ve recommended in Paris, Boston, and Bangkok. Working with influencers works – but if you’re looking to actually generate bookings, you’re going to need to focus primarily on blogs, not Instagram.”

So what does the future hold? Legions of influencers brandishing smartphones and making demands? Or something more collaborative?

“I have one major hope for the future,” says McCulley. “I want to see influencers branching out more and not going to the same destinations, the same photo spots, doing the same poses. Instagram is a major factor contributing to over-tourism in places like Iceland, Bali, and Barcelona. This is why I’m trying to do the opposite, driving independent travellers to places like Guyana and Lebanon and Ukraine.”

For The Projects’ Jack Bedwani, the modern influencer is nothing new – they are just carrying on a time-honoured tradition. “No one could have predicted how big influencers would become, or the impact it would have on our culture. In the Instagram era, the way in which we interact with the world is brand new,” he says. “One thing that we know will remain constant is our need for connection. It’s innately human to want to bond with one another and find common ground. We will always share stories, it’s just the way in which we tell those stories that might change.”