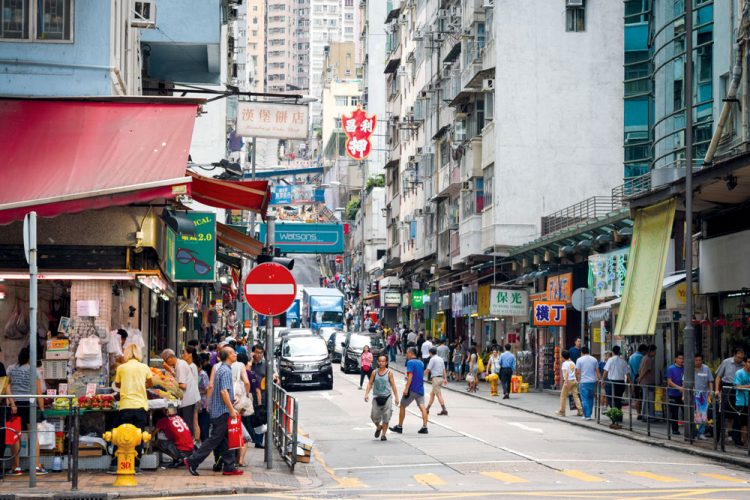 Tumbling down the hillside to the edge of Victoria Harbour, Sai Ying Pun is a neighbourhood on the up. Escalators connect the tiered streets of this rapidly developing yet resolutely traditional area, which extends from waterside Sun Yat Sen Memorial Park up to the appropriately named High Street and Bonham Road, far above.

The dried fish and seafood industry that put the neighbourhood on the map when it was settled in the 19th century is still booming, but traditional businesses now stand in bold contrast to stylish new eateries, contemporary galleries and trendy bars – from which roaring hoards of locals and expats spill onto the streets each evening, as vendors and market traders navigate the unforgiving slopes pushing wheelbarrows full of produce.

The district is still refreshingly quiet compared to its more boisterous neighbours, Soho and Central; but rising rents and a new MTR station are fanning the flames of fresh development, so visit now before it loses that unique balance of old and new.

Finding good organic food at pedestrian prices is no easy thing in Hong Kong, a situation that prompted the founders of Locofama to set up shop and bring organic cuisine to Sai Ying Pun. The healthy yet hearty menu features a mixture of carb-free and paleo dishes such as cauliflower risotto served with a runny egg, and more hearty fare like short rib braised for 48 hours, or snow crab with oolong soba noodles. Wash it down with a Healthy Green juice, made with green veg, cinnamon, ginger, lemon and coconut water. Everything is made using fresh organic ingredients sourced from local farmers, with the exception of a few imported items. Despite the slightly secluded location at the end of a cul-de-sac, Locofama draws the crowds at lunchtime thanks to daily specials and set lunch deals, as well as shoppers who come to stock up on cereals, pulses, healthy dog food and organic beauty products from the Locofama Store, just next door to the restaurant.

Fifties kitsch meets K-Pop culture at U Hang, where modern Korean cuisine has been drawing in the crowds since it opened last November. Meaning ‘trendy’ in Korean, U Hang is certainly that. The image of a traditional Korean woman with plump red lips and Jackie O-style sunglasses who beams out from the restaurant’s logo looks almost as glamorous as the hoards of Sai Ying Pun residents who fill its tables. Fun lighting installations illuminate the urban-industrial space, which was formerly a car workshop; its bare concrete walls now covered with murals depicting old Korean street scenes. The menu also mixes the new and traditional. Seoul staples like seafood chive pancake heaped with clams, mussels, prawns, squid and house-made pickle sauce sit alongside more modern dishes like KFC – Korean fried chicken with sweet and spicy sauce and coleslaw. Top it off with cocktails from a list that errs on the side of extreme flavour, with bitter, sweet and sour concoctions featuring heavily.

If you’ve ever wondered where restaurants get those wonderful wooden dim sum steamers and other bamboo products, you’re in luck; the Tuck Chong Sum Kee Bamboo Steamer Company has been supplying the quintessential kitchen equipment to Hong Kong’s restaurants for more than 50 years, and business is still going strong. At the back of a modest shop on steep Western Street, great towers of industrial-sized steamers are stacked from floor to ceiling, while smaller steamers and other household utensils are displayed up front. This is the place for authentic Chinese kitchen products, from chopsticks and placemats to serving baskets and domestic-sized steamers, as well as dried lotus leaves, which are used to create a delicate fragrance in dim sum or rice dishes. Just like the five generations before them, co-owner Lem Chick Hung and his brother can be found among the bamboo towers most days of the week.

If you’re yet to explore the world of Taiwanese street food then it’s time to catch up; this is a cuisine taking Eastern cities by storm. Queues trail down the street from Yuan Is Here, a hole-in-the-wall cafe serving a menu of simple Taiwanese street classics. Don’t let the simplicity of the names fool you – there’s a good reason why people wait patiently in line for a table every day. Steaming bowls of rich, profoundly flavoured chicken and rice or beef noodle soup appear from the cupboard-sized kitchen minutes after ordering. Try the chicken nuggets: tender morsels of chicken in a crisp vegetable oil batter brushed with a coating of salt, pepper and cinnamon. There’s an extensive list of traditional teas and unusual juices served hot or cold (think sweet and sour plum), and if you’re in a hurry, skip the queue and order anything to go.

“Train your body,” proclaims a large neon sign hanging above the bar at Ping Pong 129, a relic from the venue’s former incarnation as a table-tennis academy. Punters now train their palates rather than their bodies at this sultry lounge bar in a cavernous basement off Second Street, where gin is king. Owner Juan Martinez Gregorio stocks more than 90 varieties, the majority of which come from his native Spain. The first page of the cocktail list features 14 different versions of the classic G&T, garnished with fruit and herbs from nearby Sai Ying Pun Central Market. Double height ceilings, contemporary art and velvet drapes give the venue a theatrical aspect that’s exacerbated by the barmen, who use mini picks to shape blocks of ice to fit in oversized balloon glasses. A generous menu of Spanish tapas will keep you there for another round, but the venue closes at 11pm sharp, so as not to upset the neighbours.

Wide-open spaces are a rare luxury in Hong Kong, so residents were elated when the Sun Yat Sen Memorial Park opened in 2010, complete with a seven-a-side football pitch and municipal swimming pool. Separated from the rest of Sai Ying Pun by busy Connaught Road and hemmed in by Victoria Harbour on the other side, this is arguably the finest waterfront green space in the city, with superb views across the harbour to the skyscrapers of West Kowloon. Day and night, its paved promenade is filled with joggers, nannies with pushchairs and locals practising tai chi, while its memorial lawn acts as a serve-all green space for sun worshippers, lunchtime picnickers, or boot camps and yoga classes come evening. The large bronze statue in the centre depicts the park’s namesake, Dr Sun Yat Sen, the man responsible for the creation of the Republic Of China, who gazes back pensively over the high-rise towers of Sai Ying Pun.

In a city where bling is king, it’s refreshing to find a gallery dedicated to grassroots art and design. Founder May Wong’s Above Second Gallery (which formerly occupied a space above, you’ve guessed it, Second Street) showcases work from street artists and other counterculture creatives to put a different spin on Hong Kong’s contemporary art scene, and acts as an incubator for new talent. This year’s exhibitions have included Capital Games, featuring the work of US graffiti artist Alec Monopoly, Vices by Hawaii-born post pop artist Aaron Kai and more recently, British stencil artist Nick Walker’s Entropy. Wong and Co collaborated with major Hong Kong developer Swire Properties and artists from all over the world in 2013 to create the city’s first ever street art exhibition, featuring three weeks of events, in a bid to boost awareness and appreciation of the blossoming local scene and its protagonists.