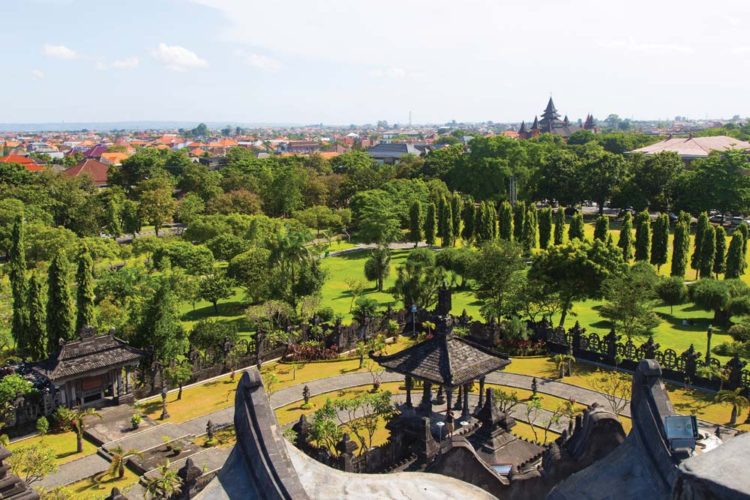 Most people visiting the paradise island of Bali shimmy straight through its capital, Denpasar, making a beeline for the palm-tree fringed tourist ghettos of Sanur, Seminyak and Kuta that spill out from Greater Denpasar. To bypass this culturally rich capital, where simple Balinese traditions coexist with the city’s modernising moves, is a rookie traveller error.

Originally a centre of the Badung Kingdom, Denpasar may be a later bloomer (it wasn’t made capital until 1958) but its surprising wealth of monuments, temples and museums ensure tourists aren’t short-changed on the heritage front.

One of the city’s most iconic landmarks, and a good place to fast track through roughly 5,000 years of the island’s history, is the enormous Bajra Sandhi monument, which commemorates the island’s turbulent struggle against the Dutch, who colonised the island in 1906. Despite the rather dark backdrop, its fountains, fragrant trees and ornate terraces make for a pleasant afternoon stroll, in the heart of Denpasar’s affluent business district: Renon. As well as being the city’s administrative centre – home to the Governor’s House and Parliament Building – Renon is Denpasar’s greenest. Local mansions flank immaculate lawns, and streets lined with trees offer a village-like atmosphere, versus the traffic-chocked urban metropolis that most people associate with the capital.

Bajra Sandhi’s panoramic lookout point reveals just how much open space this leafy neighbhourhood monopolises. Hindu temples peek out of lush shrubbery, food vendors take respite under shady trees, banks and civic buildings are invaded by bougainvillea and local restaurants remain hidden gems, thanks to their tropical camouflage. It’s also emerging as a hotbed of independent boutiques, trendy coffee shops and niche stores, thanks to young and enterprising locals who are cashing in on Renon’s untapped shopping potential. Not yet hipster enough to be the next Sanur or Seminyak, Renon is just the right side of cool to convince you a stopover in Denpasar is worth delaying that beachside cocktail for want to sit in the sun and relax. Pâquis is good for that, too. 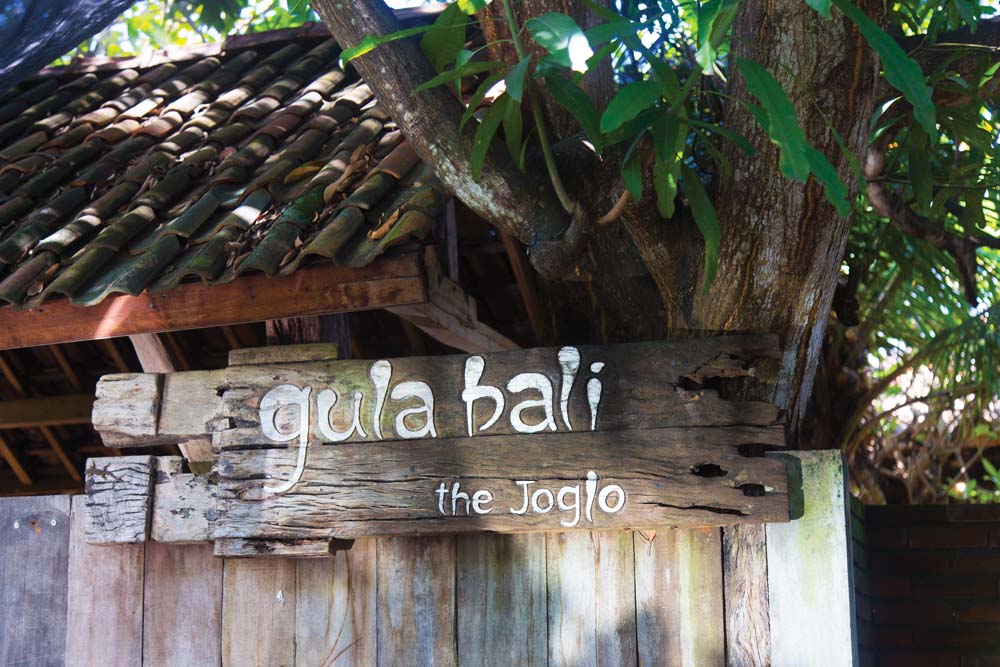 If it weren’t for the trapezium roof peeping through the tropical camouflage, you could easily walk past this local dining haunt, nestled at the end of a sleepy residential street just off Merdeka Road. Styled like a traditional Javanese house, or joglo, the main dining hall is packed to the rafters (or in this case open beam ceilings) with local patrons at midday, who typically spill out into the restaurant’s shaded courtyard. Whilst Gula Bali’s aesthetics are wholly Javanese, the restaurant takes its culinary cues from Balinese street food. Humble plates of traditional dishes like jaje Bali, rujak serut, and tipat cantok are ladled out of giant pots on to lime green plastic crockery, starting at less than US$1. Try the mashed cassavas served with palm sugar-infused coconut milk (singkong salju), washed down with one of their ice jazzed-style specials like lychee joglo. And leave room for their signature rujak campur dessert – a medley of fruits drenched in palm sugar syrup.

In The Area (Four-Minute Scooter Ride) 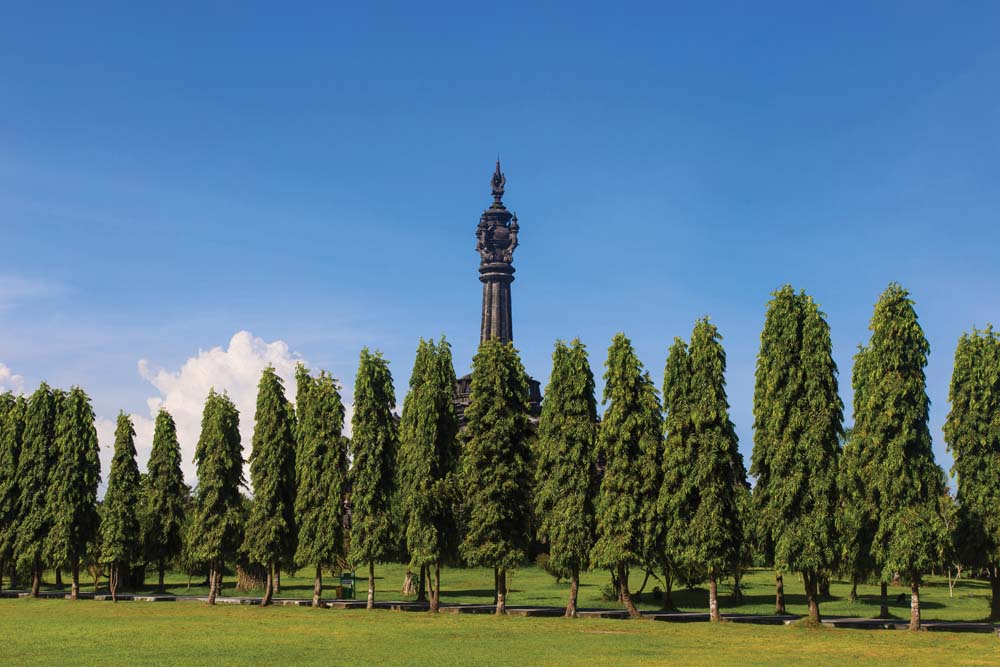 A hive of activity come rain or shine, this popular park is where locals come to skateboard, fly kites, cycle, devour street food from one of the local kitchen carts and practise yoga. 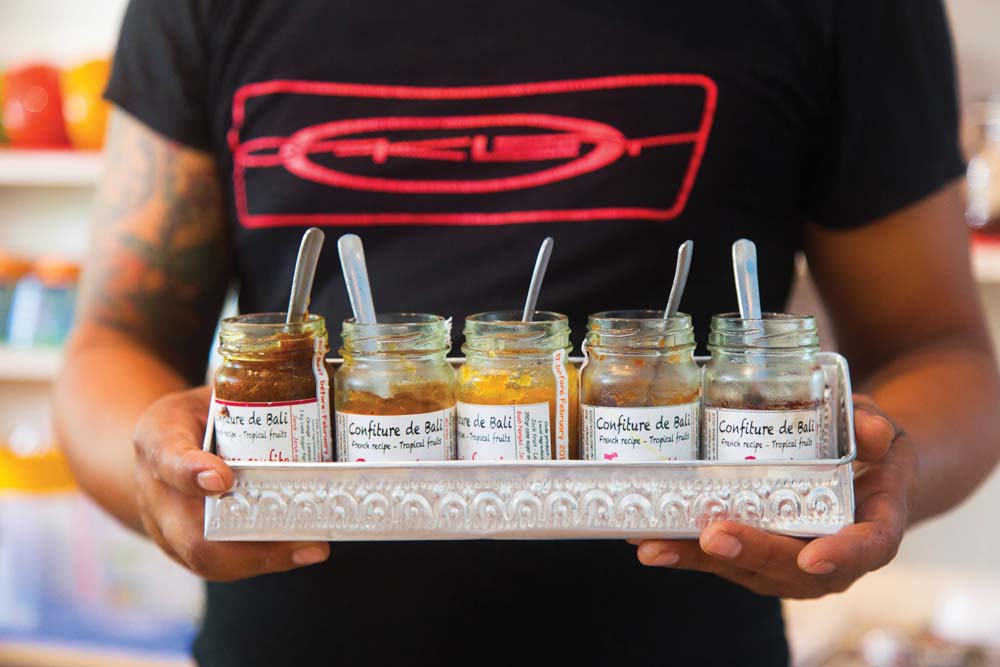 The creation of a French expat and local Balinese man hailing from Ubud, Confiture de Bali started life as a creperie, and is now a jam connoisseur’s heaven. Each jar of low-sugar, additive-free goodness is made by hand, from the tropical fruit contents (which use just 360g sugar for every 1kg of fruit) to the batik lid covers, crafted by local women. The farm-to-toast jams use seasonal fruits sourced from organic farmers in the area, and are given a continental twist courtesy of co-owner Michelle’s old-school French recipe. At their Renon store on Sumerta Kelod Street you can drop in for a smoothie, pancake and free jam tastings, which involve a mind-boggling array of flavours such as spicy papaya and sour sop, laced with exotic local spices. Adventurous epicures should try the tamarillo (a tree tomato) and buni (a wild berry) – both indigenous fruits that will make your morning strawberry jam on toast seem positively pedestrian.

In The Area(Ten-Minute Scooter Ride) 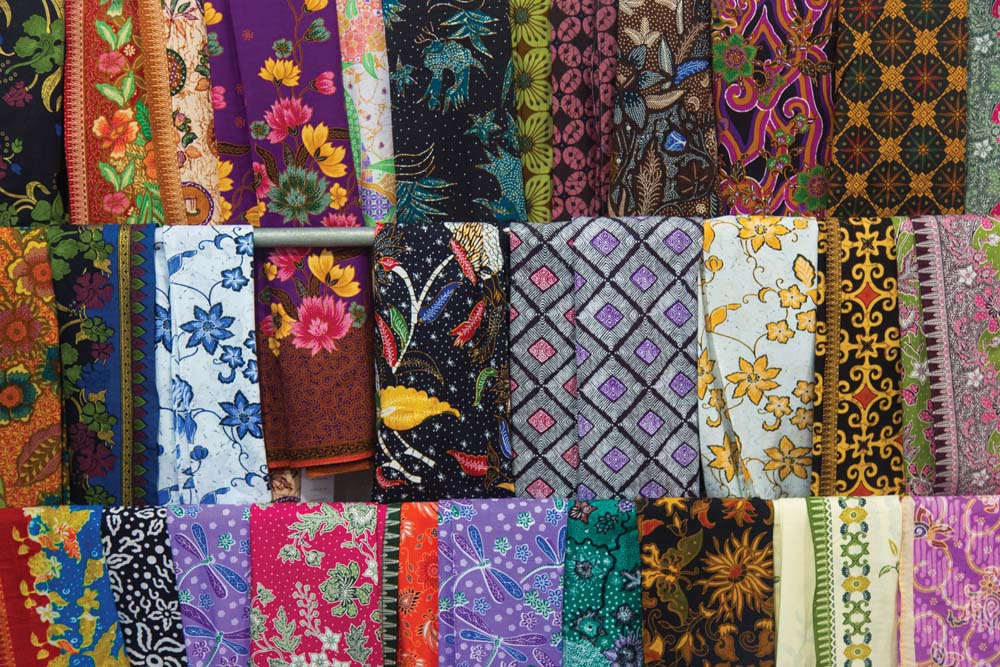 Famous for its batik, Mama Leon stocks something for every taste (and every price bracket) ranging from deep-dye scarves to handmade lace and embroidered patchwork. 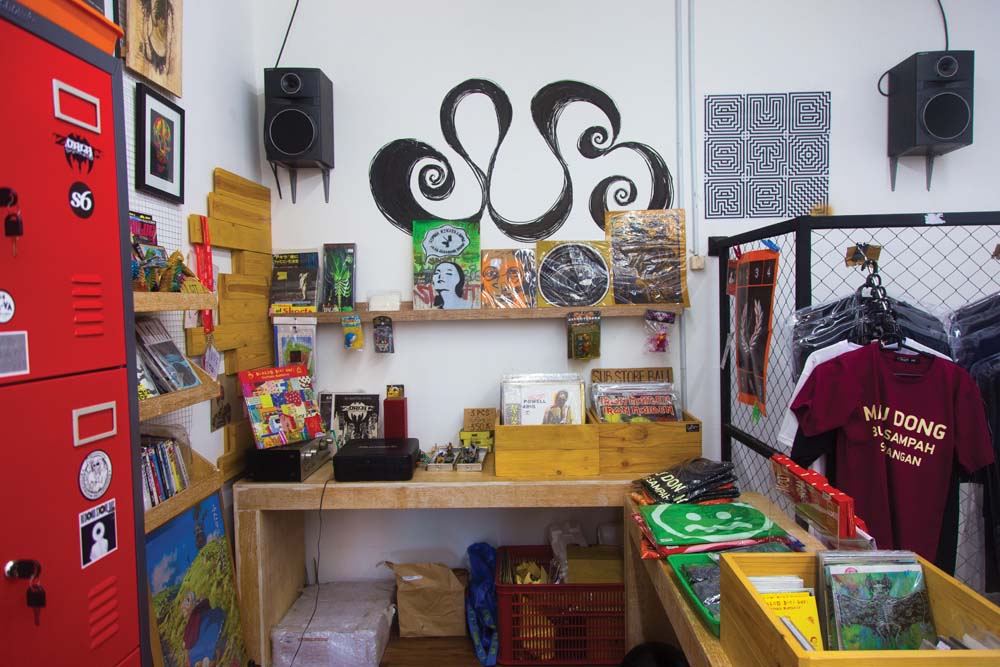 Opened in 2015, this two-storey craft-meets-vintage store’s close proximity to the city’s art institute and university is no accident. Design students, craft hobbyists, and painters talk acrylics and make creative chit chat across its first floor shelves, which overflow with knitting yarns, wooden mannequins, spray paints, washi tapes, architectural model supplies and more than 20 different brands of brushes. It’s the place to go for specialist, hard-to-find art brands and transforms into a gallery space hosting art classes come the weekend. Head upstairs to the SUB Store – an outpost of the popular Jakarta shop, which houses an eclectic mix of vintage fashion and vinyl. Shop for collector miniature Tokoh action figures, slogan T-shirts printed by local designers and every imaginable genre of vinyl from funk to motown and rock to heavy metal, which you can nostalgically hum or move to on the old-school turntable.

In The Area(Five-minute scooter ride) 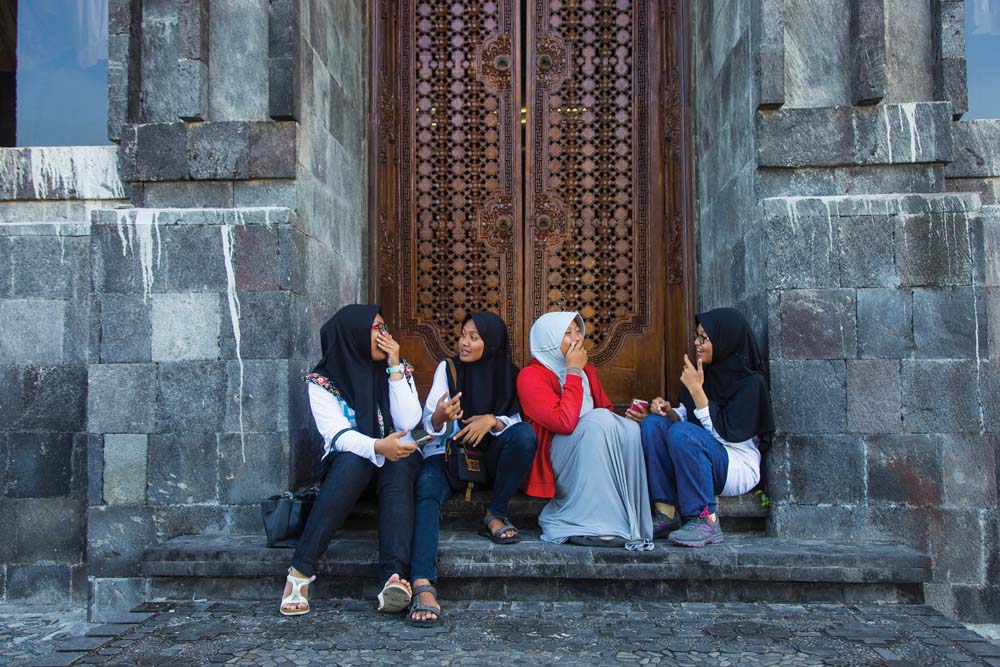 Head inside this historic monument to study the 33 dioramas that chart Balinese history from 30,000 BC to the modern day, then take the spiral staircase for 360-degree views over the city.