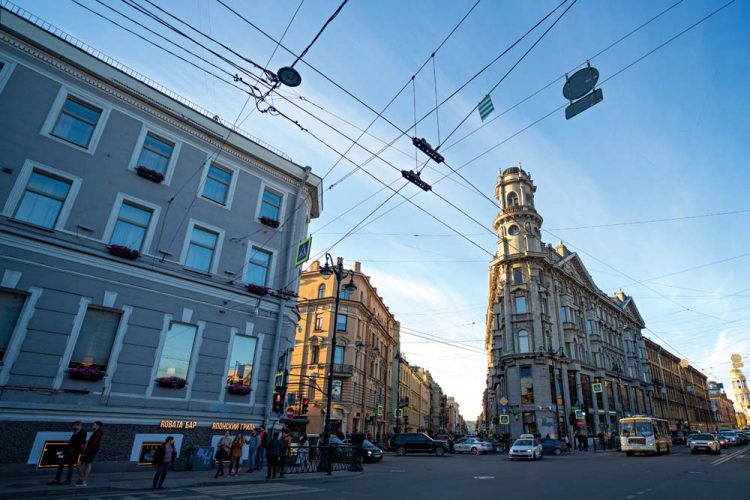 Stretching from the city’s majestic Admiralty to the edge of its sprawling, Soviet-era suburbs, Nevsky Prospekt’s piebald buildings celebrate food and fashion from across the world.

Whether visited in winter’s depths – its streets bleached white with snow and lights that dazzle long beyond Orthodox Christmas – or in summer, when seemingly unending days cast long, lazy shadows over its many treasures, a walk along this three-mile highway is one of Europe’s most pleasurable strolls. 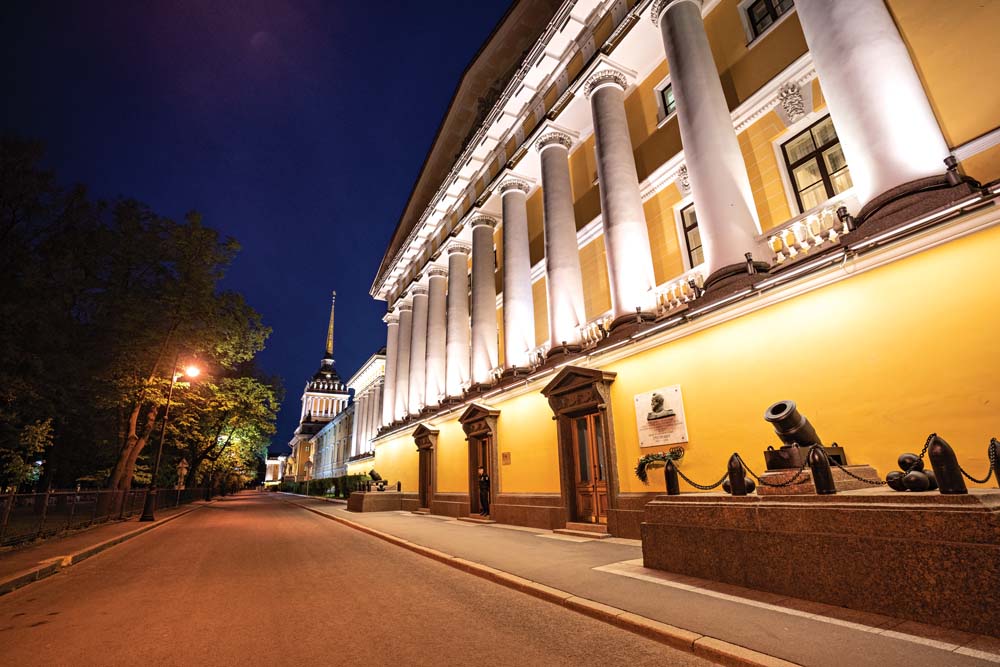 Marvel at the sheer impressiveness of landmarks like Kazan Cathedral and Singer House, and pause along the way to check out some of the gritty new bars, cafes and restaurants that have helped the city become a bastion of cool in post-Soviet Russia. Whether you’re looking for a big night out, or a quiet hunt for culture – Nevsky Prospekt offers a singular take on most activities.

Tsar Peter the Great founded St Petersburg in 1703, and the Admiralty began life a year later, as a fortified dockyard. The grand, spire-topped building that stands today is an 1823 renovation. Resting on the south bank of the Neva River it is arguably the city’s focal point, yellow-walled, gold-topped and an unmistakable emblem of the grandeur of Imperial Russia. Surrounded on all sides by pretty Aleksandrovskiy Garden, with its vivid flower beds and thick copses, the Admiralty is now a naval college, and beautified symbol of St Petersburg’s maritime pride.

The gorgeous, copper-domed Singer House, built in 1904 in a meandering art nouveau style, is known locally as the House of Books. Appropriately located inside the building is Dom Knigi, a bookshop with vaulted ceilings and plenty of spots to relax and take in what has been one of St Petersburg’s leading intellectual meeting points for over a century. Above the store is a pretty café called Zinger, where coffee drinkers can gaze out of the windows onto the sweeping Kazan Cathedral.

The Belmond’s status as St Petersburg’s premier five-star residence is clear from the clique of supercars that often clog its driveway, just a block from the sweeping Kazan Cathedral and art nouveau treasure, the Singer House. A visit to the hotel, which has its own caviar bar and chocolatier, wouldn’t be complete without experiencing its L’Europe Restaurant, bathed in the light of its stained glass and ornate, vaulted walls. The hotel has been a stopover for stars like Tchaikovsky, HG Wells, Debussy and Stravinsky, and its suites, named after famous residents, are among the most luxurious you’ll find anywhere in Europe. Little wonder the Grand Hotel Europe was chosen as the setting for 1995 James Bond thriller GoldenEye. “A true trading city, where you can’t leave without buying,” goes the Great Gostiny Dvor’s motto – and not without merit. One of the earliest shopping arcades on earth, the neoclassical
mini-city, almost a mile long, houses over 3,000 traders, fashion houses and food stores from across the world. And while many of the world’s trendiest brands have upped sticks for their own buildings, Gostiny Dvor is still an excellent reminder of the city’s vitality. Just off the Anichkov Bridge, with its famous horse statues and unmatched views of the sweeping Fontanka River, Mishka sits beneath an unassuming building opposite the Fabergé Museum. It is a well-priced, dim-lit bar with great cocktails and atmosphere perfect for the slow build into a long, St Petersburg night out. Most nights the bar plays host to DJs and live acts in a wide range of musical genres, and it’s one of few bars in the neighbourhood that feels truly local. 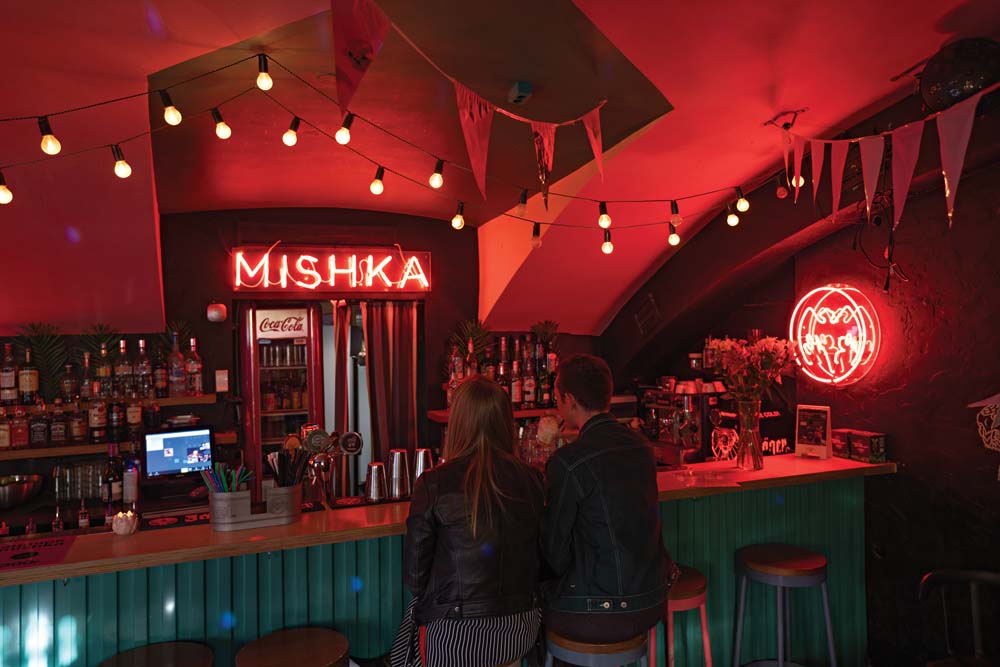 St Petersburg’s first-ever Russian restaurant was located on the spot where Palkin now stands, past Anichkov Bridge, when Nevsky Prospekt begins to look less like a giant museum and more like a high street – albeit an epically grand one. Today Palkin is widely recognised as one of the city’s best fine dining locations, offering banquet menus of modern European, and classical Russian, dishes in a luxuriant, history-rich setting. No Russian meal would be complete without cake, and Palkin’s pastry chef has constructed a dessert menu hearty enough to brave the Baltic winds outside for several hours to follow. Taking its inspiration from “a sincere faith in doing the right thing,” Orthodox, with its clean design and packed bar, is the ultimate place to take in Russia’s national drink. Chief barman Dmitrii Suvorov has created over 20 cocktails inspired by St Petersburg’s famous artistic giants like Dostoyevsky, who lived just around the corner, and Tschaikovsky, whose Sleeping Beauty and Nutcracker Suite are directly referenced. Of course there are plenty of snacks to line the stomach, and Orthodox’s chicken liver pate, salami sandwich, cheese platter and other dishes are an homage to St Petersburg’s historic place as a Russian gastronomic highlight. 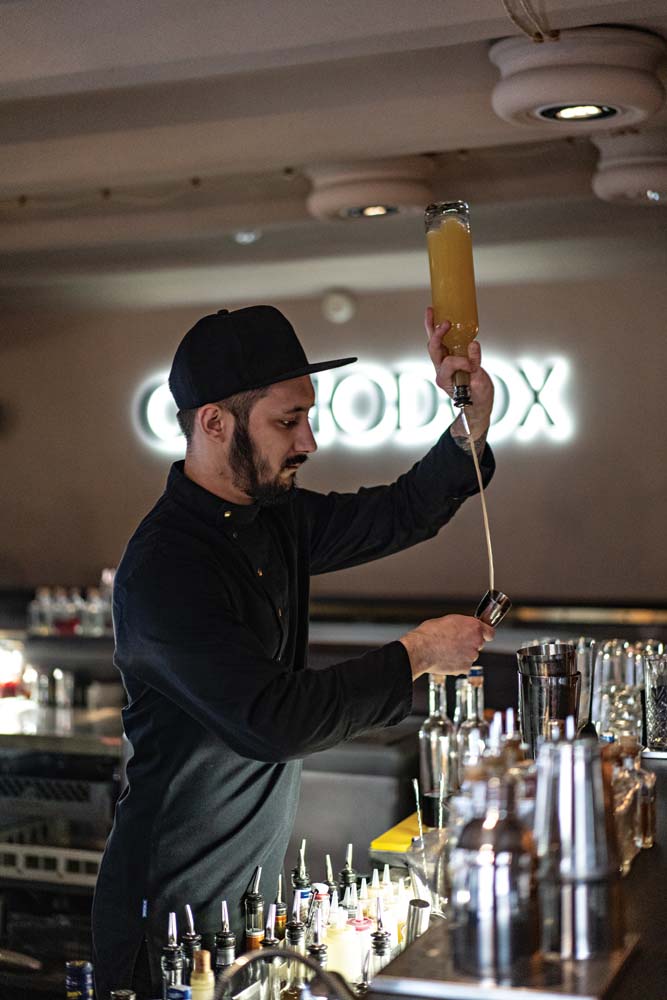