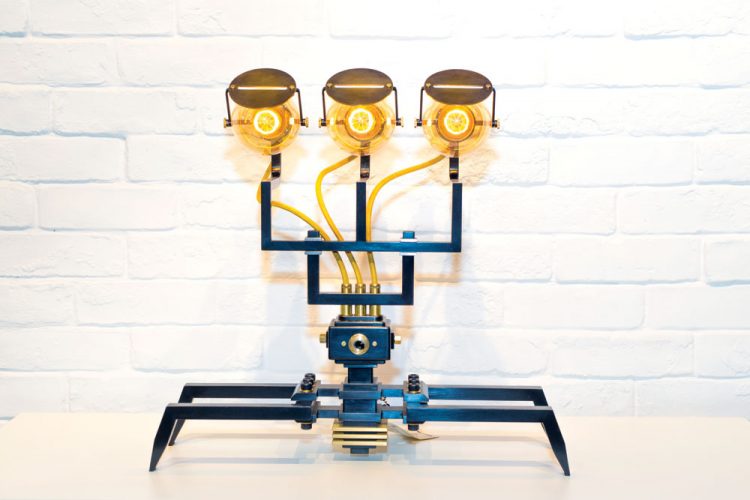 Robot clocks, over-sized spider timepieces, industrial otherworldly lights, and a life-sized steel shark named Poseidon. An afternoon spent in this art gallery is one like no other in the city

It would be something of an understatement to describe the Swiss watch manufacturer MB&F as being cut from a different cloth to its peers. In fact, just a glance through its collections shows creations so intricate that they would look more at home on the cover of a Jules Verne novel than in a Baselworld roundup. So what they did next should come as no real surprise.

Curated by founder and creative director Max Busser, MB&F M.A.D. Gallery combines mechanical and kinetic sculptures and devices, with a Tron sensibility, matched by artisanal craft and the science of technical engineering.

With spaces already in Geneva and Taipei, its latest instalment at Dubai’s Al Serkal Avenue, as Busser explains, is ready to shock and awe.

The M.A.D. Gallery curates kinetic and mechanical art from artists all around the world. A first of its kind, it concentrates on innovation, crazy ideas, incredibly high craftsmanship and the stories of the creators, who are often as inspiring and engaging as the works they create.

I’ve always believed that mechanical creations could be art. I wanted to be a car designer since the age of four and saw those 1950s to ’70s cars as works of art. They were created by strong-minded characters who did not care about what clients thought. They were engineered with incredible artisanship, while spending insane amounts of money to make their creations beautiful… as much in shape as in detail.

Alserkal Avenue in Dubai embodies perfectly what we’re looking for, a platform that engages people to think differently. A gathering and a community of individuals (the exhibitors as much as the visitors) who are extremely diverse and at the same time are there to defend their idea of art, design or craftsmanship. In a world of über-marketed products, which to me all look the same, it’s so refreshing to be awed and amazed by individuals who are actually expressing themselves.

I curate our M.A.D. Galleries and I collect memories. Every artist, creator and designer who we curate has made my heart beat faster. Most have given up what many would consider a ‘normal life’ for their art and creations. When I contemplate one of their pieces I think of them, of their hardships, their abnegation, and the smiles and laughs we shared. It makes me proud that by helping them, or buying their pieces, I allowed them to create the next one.

In Dubai you can expect some amazing things. The curation will range from Chicara Nagata, whose insane ‘motorcycle’ machines and his personal story of tragedy and passion remain one of my most vivid encounters, to a Frank Buchwald, who crafts only 12 or 13 Machine Lights a year, each a mind-blowing work of art, which by the way also gives light. With M.A.D. we are like an orphanage welcoming the few artisan creators who believe beauty and craftsmanship still trump all else.