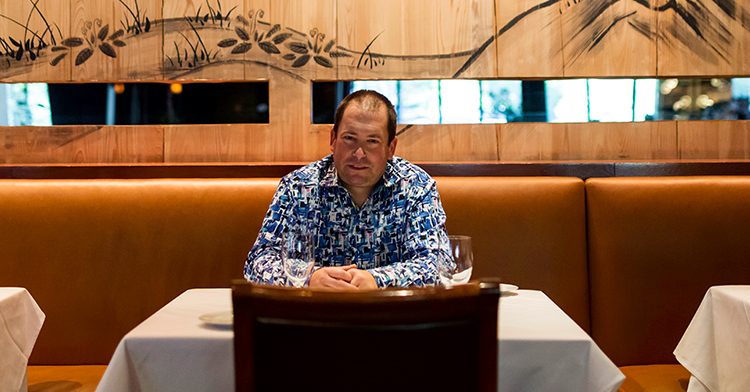 “Most of what I saw was bleached and about 25 per cent of the reef looked like this,” he says, pointing to the pristine white linen covering our table. Corals starve when the ocean absorbs too much carbon dioxide from excessive fossil-fuel burning, causing water temperatures to rise, leading to higher acidity, and then bleaching. “You don’t understand that a coral is dying until you’re shown what it looked like before,” he tells me, referencing the recent must-watch documentary Chasing Coral, which does a good job of doing just that. “And that’s not even the worst part of the ocean – it’s the plastics causing this acidification also. And microplastics getting dumped in there.”

I meet Schneider at French-Asian fusion restaurant Chaya in Downtown LA. He’s just back from a shark diving expedition with clients in Los Cabos, Mexico, and the beautiful dining room, backed by a stunning 10-metre hand-painted landscape mural by Japanese artist Ajioka, bustles with the local work crowd during the lunchtime rush.

A quick scroll through Schneider’s Twitter feed @BiologistDan shows his longstanding concern for our changing planet and how interdependent we are on its survival. In April 2016, Senator Bernie Sanders retweeted one of Schneider’s posts about global warming, and added Schneider to his followers list. “That’s when my followers began to spike,” he says. “Looking back, it’s funny because a single tweet today gets 10 times the views it did back then.”

After earning a bachelor’s degree in molecular evolution, Schneider began working as a lab director for a biotech company doing cancer research. At the same time he was leading whale-watching tours in Boston for a company called Mass Bay Lines. It took him four years to realise that he wasn’t an “indoor” biologist and more and more clients began requesting private dives. Around that time, he was approached by the Public Broadcasting Service (PBS) channel to comment on whales, and was getting hired to do talks, too. Seven years ago, Schneider started his own Boston-based company. His current day-to-day involves taking clients on environmental and eco-dive tours, coordinating corporate retreats, doing background checks on information packets for non-profits including Greenpeace and Sea Shepherd Conservation Society, and fact checking educational literature. “Right now I’m reviewing a textbook on sharks by a professor from Johns Hopkins,” he reveals.

“What does sustainable mean? Not overfishing,” Schneider says. “One of the big problems is salmon. Let’s talk about salmon in Washington, Puget Sound. There’s a lot of salmon up there but it’s not wild. What’s happening is that farm-raised salmon is taking over, and what’s worse is that Atlantic salmon is getting dumped into Puget Sound, causing a whole cascade of things. Orcas are starving to death because there’s not enough of the wild Pacific salmon. They’re particular about what they eat, and won’t eat the Atlantic salmon.” And then there are the huge drift nets that are dumped into the ocean (net fishing is the most damaging way to catch fish, not to mention being illegal), which capture everything including dolphins, sock eyes, tunas and whole schools of fish that end up losing their reproductive viability. Furthermore, companies using ghost nets only go back to collect those that are heavy in weight. The others are simply left in the ocean, catch onto reefs, collect debris, and sadly, marine life with it.

“Becoming environmentally conscious is not as hard as it seems,” says Schneider. “Every time you go to a restaurant, say ‘I don’t want a straw.’” No change is too small. “In Boston, it only took us a year to get them to ban plastic bags. California State has done away with plastic bags – they’re phasing [them out].”

Education about our waste culture is vital if we are to make strides towards a more hopeful future. “You need to get the ball rolling, starting in schools,” continues Schneider. “Curriculums need to change and schools need to lead by example by not using plastics, while kids need to pester their parents to use canvas bags.” In Boston, environmental conservation is part of the collective consciousness. As for the rest of the United States? “We’re working on it,” he laughs. “A lot of environmental groups are trying to include it in school curriculums, but the problem is that the textbooks don’t really want to teach evolution.”

It’s not the US that produces most of the ocean garbage that’s mostly made up of plastic, incidentally, but India and China via the Indian Ocean, Schneider explains. For facts and figures, you only have to Google ‘The Great Pacific Garbage Patch’ and you can read up about the largest accumulation of ocean plastic in the world. Covering an area three times the size of France and located between Hawaii and California, the mass totals 1.8 trillion plastic pieces and weighs over 80,000 tonnes. “It’s incredible,” Schneider says. “It’s a problem that’s not unmanageable, but it’s expensive.” He has since tweeted about Henderson Island in the South Pacific, the most polluted place on earth, stating that 19 tonnes of garbage – that’s 38 million pieces have washed ashore this uninhabited island.

This summer, Schneider will run a Periscope feed using his @BiologistDan handle. “Periscope has a new feature where you can use DJI Drone footage as your video feed. You can toggle between your live feed and the drone. I’ll be going on location to show good and bad environmentalism. I’ll show huge garbage patches. You’d be surprised where they are. I’ll be in Florida for ‘turtle runs’ and in New England filming whale and shark behaviour. Feel-good things like that.” He’ll also be showing the negatives, too. “For obvious reasons, I can’t say where I’ll be doing that. It would be very hard to get permits to bring the drone to some countries if they knew what I would be showing. Dam operators blocking salmon migration in Oregon, which leads to orca starvation, could take countermeasures to block my drones. Whale hunts, dolphin captures, cruise ship trash dumping, and fishermen dropping long drift nets are just examples of footage I’ll be taking and explaining why they’re bad.”

Preventing ocean pollution is paramount and, at a grassroots level, we should consider approaching companies about curbing single-use plastics and bringing in our own glass bottles to refill. “Let’s talk about Coca-Cola for a second,” he says. “People have been after Coca-Cola for quite a while about their bottles. They are the number one producer of plastic bottle waste in the world. If you go into a supermarket now, you’ll notice they now have the big machines that allow you to bring in your own bottle. This will ultimately take over at Coca-Cola. You go to a movie theatre, an AMC, and they have those machines. They’ll be in 7-Elevens. Same with Starbucks: If you bring in your cup, for example, they’ll fill it with coffee for half the price; small Boston coffee shops give a discount too; in Argentina, you can’t buy a beer without bringing in an old can.” Refilling from bulk bins and machines is doable but they aren’t numerous, especially if stores don’t push producers to change their ways. So the next best thing, Schneider suggests, is to choose companies that use planet-friendly packaging, or recycled plastic at least.

Every time you go to a restaurant, say ‘I don’t want a straw.’” No change is too small.

As for large-scale cleanup efforts, ambitious proposals include hooking cargo ships with garbage trawlers that scoop trash. But locally, the onus is on communities to take responsibility for their surroundings and pick up after themselves. Schneider goes to beaches in Boston once a month to pick up discarded plastics – something we can all do, from Goa to LA.

In between heart wrenching posts, Schneider’s Twitter feed offers glimmers of hope. Soundbites such as: “Good news! For the first time since counting began, the number of critically endangered Irrawaddy dolphins in Cambodia has increased from 80 to 95. Fishermen in the Mekong River have stopped using unsupervised drift nets while fishing. Keep it up.”

And: saviours. Yesterday rescuers from the Centre of Coastal Studies freed a humpback whale who was entangled in fishing line in Cape Cod Bay. This is dangerous but necessary work. There are so few whales left.

After our interview wraps, I come across a Los Angeles Times article that was posted that very same day, stating that as of June 1, 2018, Malibu will enforce a ban on all plastic utensils, stirrers and even plastic straws, swapping them out with those made of paper, wood, or bamboo. Malibu was the first city to ban plastic bags, which went on to influence statewide change. Leading by example, Malibu should once again succeed in influencing city, country, and even worldwide change with this most recent single-use plastics ban. At least that’s the hope. 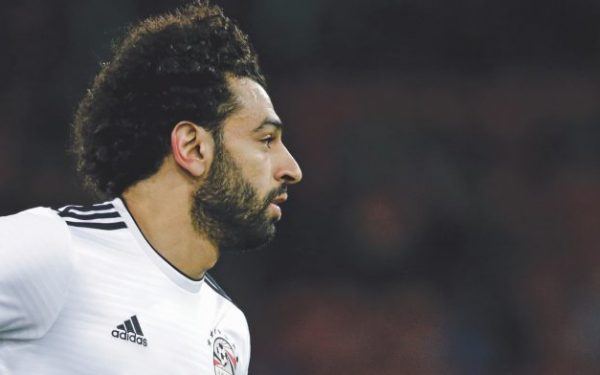 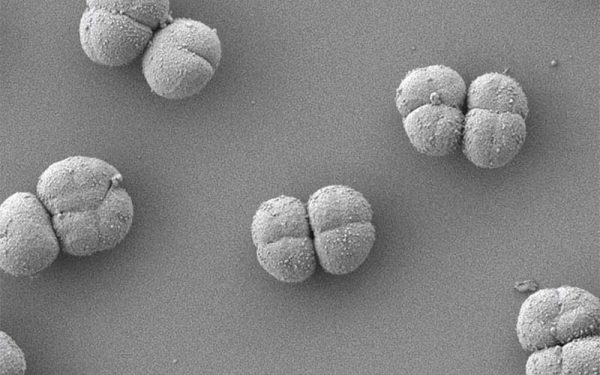 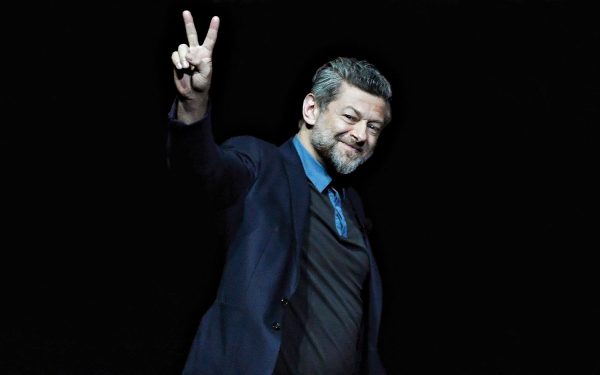