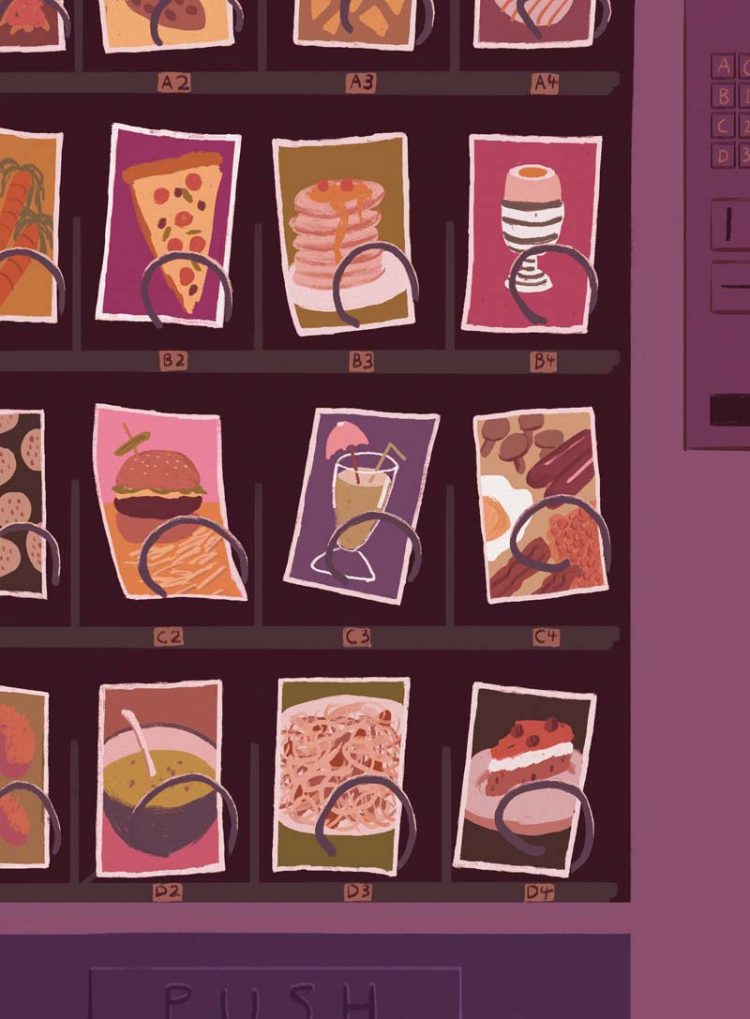 Food should be a multisensory experience: a tantalising aroma wafting up to the nose, a play of textures exploding in the mouth, a surprising combination of flavours lingering on the palate. However, in today’s social media-driven, highly visual world, we are constantly interacting with food only through sight. The old aphorism ascribed to the first-century Roman gourmand Apicius, “We eat first with our eyes”, has never felt more accurate. If an elaborate, scenographic presentation of food was favoured by Roman patricians as a means to amaze their guests and express their wealth and prosperity, the digital world we live in has amplified the importance of food visuals in all four corners of the earth.

“While the senses of taste (gustation), smell (olfaction), and texture (touch or oral – somatosensation) provide the ultimate arbiters of a food’s palatability, visuals make for a big part of our appreciation of food. The natural desire, or urge, to look at food could well be an evolutionary adaption: our brains learnt to enjoy seeing food, since it would likely precede consumption”, says Charles Spence, Professor of Experimental Psychology and Head of the Crossmodal Research Laboratory at the University of Oxford.

“Foraging – the search for nutritious foods – is one of the brain’s most important functions, and in humans, this activity relies primarily on vision”. Food and sight are so closely linked that it has been suggested that trichromatic colour vision could have developed in primates as an adaptation to help identify colourful fruits amongst the dark green canopy.

Nonetheless, if visuals have played an essential role in the human relationship with food since time immemorial, there has arguably never been a time where they have been so preponderant. “What’s peculiar in our age is the absolute dominance of the visual: we live in the age of the images of food, and sometimes food is reduced to its visual appearance”, says Nicola Perullo, Professor of Aesthetics at the University of Gastronomic Sciences of Pollenzo, Italy.

Over the last few decades, exposure to idealised cooking procedures and beautiful plating has ballooned: exquisitely illustrated cookbooks have become bestsellers and cookery shows fashionable. The Internet took visuals to another level by putting the user at the centre – according to Statista, half of Americans take pictures of their food before starting a meal, and food hashtags account for millions of search results worldwide. Beyond refining the art of plating and serving, the battle for likes and comments on the food web scene has led some restaurants to adopt offbeat techniques to encourage social sharing, such as providing Instagram kits – including LED lights, clip-on wide camera lens and selfie sticks – or printers that scan selfies on the front of drinks.

According to Perullo, the current marketisation of aesthetics doesn’t come without a cost, and with rainbow bagels, quintuple burgers and metres-tall ice creams jostling for the food hashtag podium, it’s easy to understand the risks. But if high-calorie, plastic and unhealthy food is apparently ideal Insta-worthy material, there’s no reason why visuals can’t be twisted and turned to advocate for different narratives.

On the issue of food waste – an ugly problematic in all senses – visuals are being used creatively to shed light on the problem. Initiated in Germany to prevent a startling 40 per cent of agricultural produce from being rejected by supermarkets for failing to meet cosmetic standards, the “Ugly Food” movement campaigned for the commercialisation of perfectly edible and tasty, if ugly, produce. Adopted since in many other countries, by both small shops and supermarkets, the movement’s ethos has flooded to social networks, through profiles like that of NYC-based food stylist Sarah Phillips (@uglyproduceisbeautiful), who aims to explore the appeal of the misshapen, discoloured and knobbly.

Making a compelling case for the subjectivity of beauty and the deceptive nature of visuals, photographer Klaus Pichler elegantly portrayed rotten food against a black setting for his project “One Third” – named after the UN statistics reporting that roughly one-third of the food produced in the world for human consumption gets lost or wasted every year. Intentionally emulating the aesthetics of advertising photography, the images of food covered in vivid, putrid green spots and exuberant furry mould strike the eye as gorgeous just before the brain realises what is actually depicted. 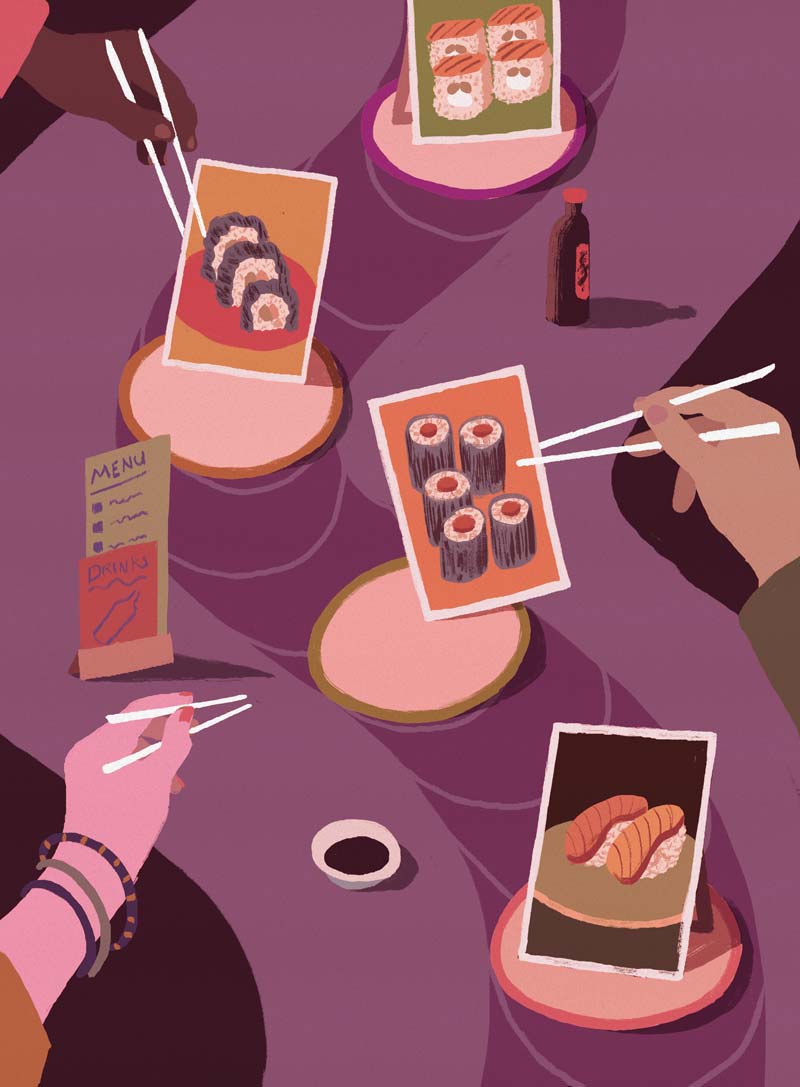 While Pichler’s work captured the essence of decay into an instant of beauty to raise awareness of food waste, others are devising captivating visual narratives to change mentalities on different food habits, and to tackle the general misconception that healthier equals less tasty. “I think alternative diets should be promoted with the same sexiness as ‘regular’ diets. They can be as appealing”, says Elise Dumas, the Parisian behind @pineapplechef. “My intolerances were a stroke of luck to help me go back to a good and healthy way of eating. They’ve made me realise I wanted to talk about good and authentic food, and I now use my experience as a former visual merchandiser for luxury brands – the ability to deal with shapes, textures, colours and the overall reading of a display – in my food styling and photography”.

Working on content mostly for visual consumption, Dumas uses several techniques to make food feel real and fresh, like highlighting different textures so the viewer almost feels he can taste it. Also, the images rely heavily on storytelling to evoke a strong sense of place, trigger sensory memories and compensate for the lack of other stimuli. “The food needs to be shot like you are going to serve it or eat it. Food is about sharing. You tell a story of cooking and making, or a story of serving and tasting, or even a story of just ingredients. Whichever story you pick, you need to stick to it and choose everything accordingly, including settings, cutlery, tableware and so on”.

But beyond storytelling and photographic artistry, another set of brain tricks can lend a precious hand to shaping our perceptions about food on the sole basis of looks, as cognitive neurosciences delve deeply into the relationship between sight and taste expectations. “The sense of sight is particularly influential in tasting expectations, and both colour and shape convey information to the brain”, says Spence. Most surprisingly, not only is the colour of food itself influential, but taste is also perceived differently depending on the colour of the crockery. Blue – a colour typically associated with unnatural and artificial food colouring precisely because blue foods are rare in nature – is reported to be off-putting: the blue tray meal deal of the Great Depression Era appears to have come out of the realisation of those offering all-you-can-eat meals that customers consumed less food if they were given a blue tray rather than a tray of another colour.

In recent studies, Spence and his team at the Crossmodal Laboratory have mapped colours according to taste expectations: “We find that most people think pinkish-white will be sweet, yellow and green will be sour, brown and black tastes bitter and white and blue tastes salty”. In terms of shape, meanwhile, rounded, voluminous and regular forms suggest sweet flavours, while angular and asymmetrical ones tend to be perceived as bitter. Armed with a powerful bag of tricks, Spence has been working alongside chef Jozef Youssef from Kitchen Theory to make our brains ecstatic about a healthy and sustainable meal, with strategies that go from serving food with a fraction of the sugar and calories that our eyes are misled to expect, to boosting the appeal of sustainable but unappetising ingredients.

There’s no room for doubt: we do eat with our eyes, now more than ever. Yet, with a touch of artistry and the aid of visual illusions, we may be able to overcome the challenges of food visuals in the digital era with flying colours.