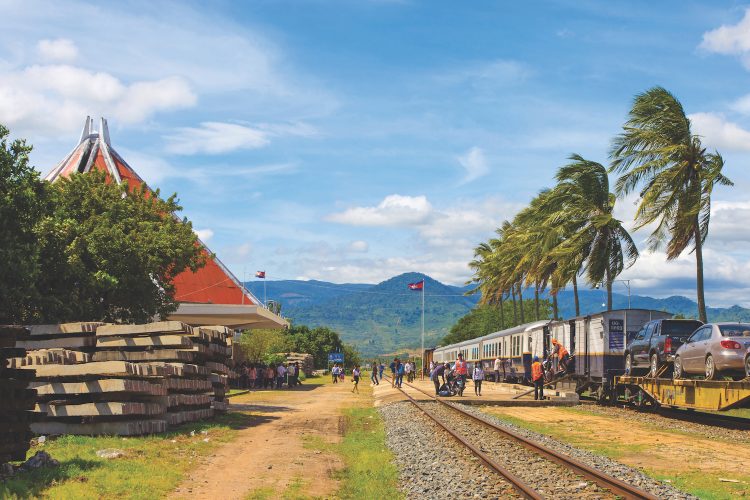 Chugging along at 33mph, the refurbished 1960s rolling stock of Cambodia’s Royal Railway is certainly no bullet train. But who wants to get to their destination quickly anyway? To move with any more speed would surely be an insult to the glorious countryside neatly framed by its windows, and rather defeat the object of cross-country train travel in the first place.

The Royal Railway passenger service reopened only 18 months ago after a 14-year hiatus, and connects its capital, Phnom Penh, to the coastal city of Sihanoukville. The southern line is one of two tracks that traverse a total of 612km along the western flank of the country, terminating at the northern border town of Poipet. Built under colonial French rule in 1930s, the Phnom Penh to Battambang northern line remains out of action, save for a rickety bamboo ‘nori train’, which rattles along at 20mph over a 7km stretch.

After independence, France, West Germany and China bankrolled the southern stretch of track to ferry goods to Sihanoukville port – now a gateway to the country’s tropical islands and the mangrove jungles of Ream National Park. For the road and plane-weary traveller, the train serves as a more exhilarating way to explore Cambodia beyond Siem Reap’s magnificent but tourist-sullied Angkor Wat temples. For Cambodians, the journey is bittersweet – a poignant reminder of its troubled past and a symbol of its brighter future.

A word of warning: The six- to eight-hour journey (which would originally take a staggering 28 days) is at the mercy of track-loitering Brahman cows and the occasional engineering hitch, which calls for unexpected stops (and an excuse to stock up on fried shrimp fritters).

From city to beach

Three places to visit in Cambodia

Pay your respects at the Choeung Ek Killing Fields memorial (20 minutes out of the city centre) and S-21 Tuol Sleng Genocide Museum – both sobering sites that chronicle the country’s tragic history.

Lauded by big-name chefs across the globe, Kampot pepper has a geographical indication status that makes it no ordinary condiment. To witness the king of spices harvested by hand, hop on a tuk-tuk and visit one of the fantastic organic pepper plantations, such as Sothy’s Pepper Farm.

Reached via a four- to five-hour boat trip from the mainland, the uninhabited (and as yet undeveloped) jungle-blanketed Koh Tang island boasts a wealth of marine life and the country’s only wreck dives. It’s also the last official battle site of the Vietnam War.

CAPACITY: Alternating yellow and blue trains carry up to 200 passengers each