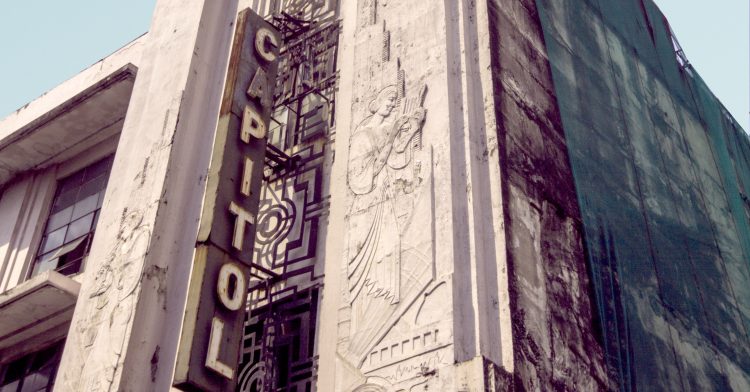 From the splutter of brightly coloured jeepneys choking its main avenues, to a wild array of religious buildings and a piebald, historic centre, the Philippine capital is a technicolour megacity that’s as breathless as it is logistically confounding.

Along with its time as a Spanish satrapy in the late 16th century, to being a US colonial property from 1898 to 1946, Manila has been a place where Asia meets Europe and North America, and this modern history is writ large in its architecture.

It was during the American period that a hunger for western influence flourished. Filipino artists, designers and engineers jetted off to universities across the world and returned with the skills and inspiration that have shaped their capital ever since.

“Art Deco style in the Philippines can be understood both as the imposition of power by the coloniser and the demonstration of resistance of the colonised,” commented interior design academic, Edson Roy Gregorio Cabalfin.

The result was an intermingling of cultures, a hybrid Art Deco style that came to represent what the people of the Philippines brought to the table, rather than a simple imposition of its colonisers.

ALSO READ: Casablanca and an Art Deco homage to LA

The pre-war pinnacle of this movement was probably the Crystal Arcade, a lavish, moderne shopping mall that sat among grandiose neighbours in Manila’s central Escolta district. Unfortunately it was destined for a devastating fate just 13 years after its construction, when Japanese troops tied explosives to its foundations towards the end of the Second World War. By 1966 what remained was simply irreparable, and the Crystal Arcade was demolished.

Conflict wasn’t the only reason behind the loss of Manila’s steel and concrete heritage, however. Thanks to a population boom from 1.5 million in 1948 to the 13 million-strong metropolis it is today, the rush for living space has meant that much of its historic architecture has been left behind.

Bad decisions at government level have also played their part. The iconic Jai Alai building was considered one of the finest Art Deco buildings in Asia when it was built in 1940. It survived the Battle of Manila relatively unscathed, but then was demolished in 2000 to make way for the Manila Hall of Justice – a building that was ultimately never built.

Thankfully, some structures have survived, and a walk around the city’s central districts is a great way to discover them. Binondo, home to the world’s oldest Chinatown, is crammed with Art Deco-builds, from the towering Capitol Theater to the ornate First United Building.

Further afield, abutting Manila in the lower reaches of Quezon City, you’ll find Quiapo Church, which sits beside the former Times Theater and the huge facade of the Far Eastern University. The square outside the church has been home to protests, rallies and soapbox speeches, making it one of the city’s political, as well as religious, hearts.

However the Metropolitan Theater is the jewel in Manila’s Art Deco crown. The salmon pink building, which stands beside the bend of the Pasig River on the edge of Intramuros, was inaugurated in 1931, when the Philippines was under US possession. Partially destroyed in the war, the theatre fell into disrepair and was used at various times as a bar, motel, boxing arena and basketball court. Promises of renovation came and went under successive governments, and it seemed the Metropolitan would be doomed to a slow and public death.

In 2015, however, the ‘Met’ got an overdue state reprieve. It will now be restored, experts hope, within the next five years. “No other building in the Philippines would be in the same conversation as the Met when it comes to the sheer volume of talent, artistry and passion that has been seen through its walls,” says architect student Juancho Agoncillo.

Some locals have begun a fight to preserve other buildings beside the Met, too. Ivan May Dy is a tour guide and organiser of Old Manila Walks, which runs an Art Deco tour of the city. Preservation of his favourite architectural style is important, “These works represent a period in Manila’s design history that was shaped by local architects,” he says. “It anchors Manila to her past.”

The walk is also a great way to explore the city: a way to look up beyond the chaotic street life and experience something that, while beautiful, is grounded in Manila’s palimpsest history. While Art Deco has become a byword for style and culture across the world, in Manila it acts as a historical record, too.