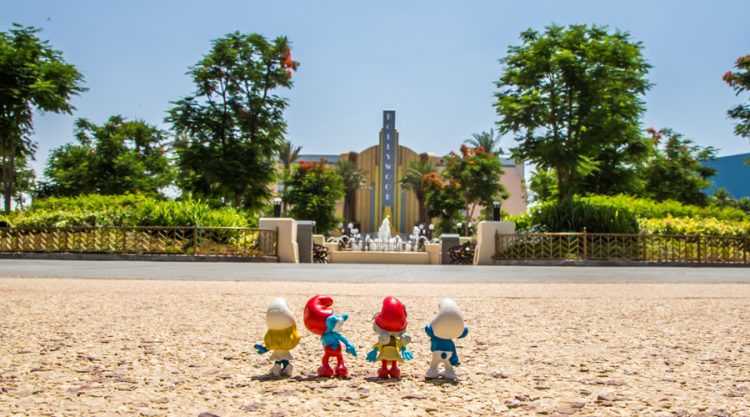 Approximately every 10 minutes a new fountain show begins at the foot of the Burj Khalifa. Music sounds, water rushes, the display commences. Only it’s not the real Dubai Fountain, it’s a scale replica made of Lego bricks.

We are in Miniland in the heart of Legoland Dubai, where the city’s skyline and other landmarks from across the Middle East have been recreated on a scale of one to 25. Only the Burj Khalifa is different, scaled down to one to 50 to fit inside the venue’s vast 25-metre-tall dome. Fittingly, it is the tallest Lego building in the world.

There’s the long, iconic strip of Sheikh Zayed Road too and its accompanying metro, the dhows and abras of Dubai Creek, the Burj Al Arab Jumeirah, Abu Dhabi’s Sheikh Zayed Grand Mosque, Jordan’s Petra, the pyramids of Egypt, The Kuwait Towers and The Hanging Gardens of Babylon. There’s even a 7.5m-long version of Dubai International Airport. In total, 20 million Lego bricks were used for this one attraction alone. It is just one of six themed lands within Legoland Dubai.

“If you want to do everything, one day is not enough,” admits Siegfried Boerst, general manager of Legoland Dubai. “And that’s just one park.”

The two of us are sitting on a terrace overlooking Miniland. It is summer. We are indoors. There is air conditioning. 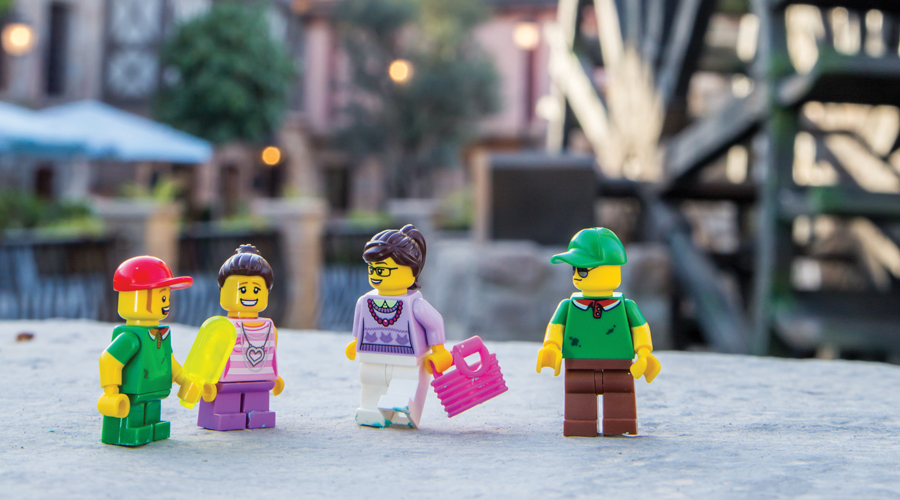 “Model builders from all over the world worked on these,” says Boerst, indicating the buildings around us. “From the US, Denmark, Germany, Malaysia. It took about three years to build all of the models and in total we used 60 million Lego bricks for the entire park. The Burj Khalifa, for example, arrived in five pieces and was assembled here, although there is a steel structure inside to support it. But everything you see is made from Lego.”

Much of it is also interactive. Press a button and window cleaners will get to work on the Burj Khalifa. Press another and the doors of a Lamborghini will open or a hot air balloon will take off over Petra. You can even crawl through a tunnel and emerge inside Sheikh Zayed Grand Mosque if you wish.

“It’s impressive to see what model builders can do with Lego bricks nowadays,” says Boerst. “The animation, the lights – it’s incredible. When it gets dark outside we dim the lights in the dome and you’re mainly left with only the lights from the buildings, which creates a very special atmosphere.”

Legoland Dubai is just one attraction within Dubai Parks and Resorts, the largest integrated theme park destination in the Middle East. Nearby are Legoland Water Park, the Hollywood-inspired Motiongate Dubai and Bollywood Parks Dubai, the first theme park of its kind anywhere in the world. A fourth park, Six Flags Dubai, is under construction and due to open in 2019.

For anyone unaccustomed to theme parks, especially integrated ones, the sheer enormity of Dubai Parks and Resorts is something to behold. Built on 30.6 million square feet of land at a cost of US$3.5 billion, it features more than 100 rides and attractions with the entire destination connected neatly by Riverland Dubai, a multi-themed dining and retail district. 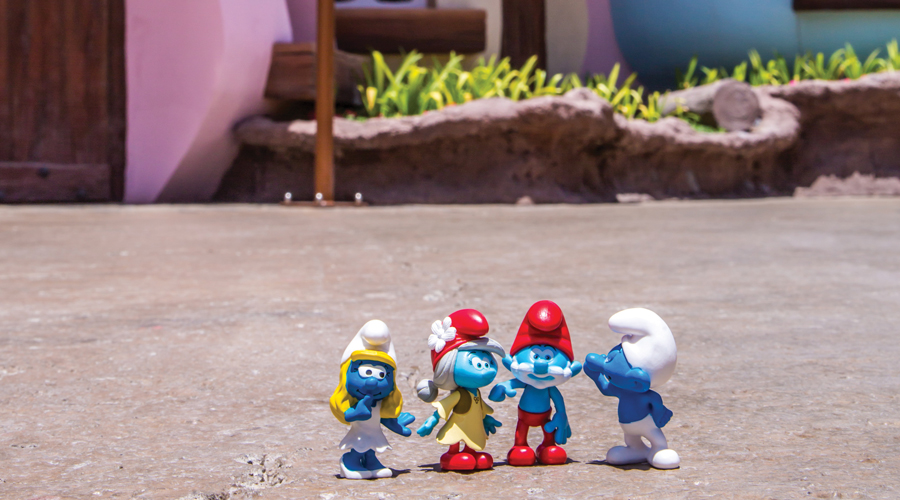 “The quality is excellent and the team was solid. We didn’t have the type of manpower that you’d see at a Universal or Disney park when they put a project together and we didn’t have Disney Imagineering or Universal Recreation so a lot more work had to be done by a smaller number of people. But when you see the guests’ reactions, when you read the surveys and you read the satisfaction scores, everyone’s extremely happy with the product we’ve created.”

The three theme parks opened at different times during the final quarter of last year while Legoland Water Park launched in January. The Lionsgate zone within Motiongate is set to open later this month or in early August but the rest are up and running, including the DreamWorks Animation and Columbia Pictures zones.

Model builders around the world took three years to create all of the models at Minland, using 60 million Lego bricks in the process

“In hindsight, with Six Flags coming in 2019 and for any future developments, my strategy would be to open in June or July so you have a couple of months to get all the bugs worked out and then hit October, November, December and have a solid season,” says Machamer. “We tried to have the entire project finished by October 1 last year, but that didn’t end up happening so we kind of missed out on our first peak season. But it’s allowed us to regroup, to make sure from a training standpoint that everybody is where they need to be and that there’s cross-utilisation of manpower across the parks. The plan now is to get the word out to overseas markets, make sure we’re on people’s travel itineraries and that the hotel is going to be full come the end of summer.”

So is the pressure on?

“Everyone wants as much revenue as possible coming in and the perceived success,” says Machamer. “And what people perceive as a success is high turnstile counts and things like that. We’ll have to make it through the summer months and look at how we can optimise our visitation during that period but October and the six months following that will be the real indicator of how effective we were from a marketing and sales perspective.” Machamer has worked in theme parks all his life. The week he turned 16, he got a driving licence and a job at Walt Disney World in Orlando, Florida, where he worked in food and beverage at Frontierland before moving to Universal Orlando when it opened in 1990. He hasn’t looked back since.

“I never would have thought it would turn into a lifelong job,” he says. “I grew up in Cleveland, Ohio and there’s an amusement park there called Cedar Point, which has got some of the most amazing rollercoasters in the world. I like the biggest, fastest, tallest rollercoasters, those kinds of rides. So for me Six Flags and working on the design of that park was very exciting. It brought back memories of my childhood at Cedar Point.

“I can remember my first day at Walt Disney, my first day at Universal and from a timeline standpoint, I have great memories as a guest and also as an employee. It’s kind of a full circle. I’ve of course been a guest, I’ve been a frontline employee and what I like about my role now is that I can make changes if I see things that are not correct or need to be changed. I didn’t think when I was a guy parking cars or working as a cashier 27 years ago that I would be making the big decisions. But it’s funny because back when I started, the senior management at Disney and Universal, those guys had also been in the parks for 25 or 30 years – so I guess you see a lot of longevity in people in the theme park business. Those who really enjoy it stay for a lifetime.”

We tried to have it all finished by October last year and that didn’t end up happening so we kind of missed out on our first peak season. But it’s allowed us to regroup

Within Dubai Parks and Resorts, Motiongate is the flagship. With 27 key rides and attractions inspired by 13 of Hollywood’s most memorable live action and animated films (21 of which are indoors), it is essentially a theme park lover’s dream. There’s Dragon Gliders, a multimedia suspended rollercoaster within DreamWorks, Madagascar Mad Pursuit, a rollercoaster that propels visitors forward at speeds of up to 85 kilometres per hour upon launch and Zombieland Blast-off, a 58m drop and shot tower identical to the one that featured in the movie.

“Outside of Dragon Gliders – which is rare because there was only one other of its kind built at the time – we took stable ride systems and created themed experiences around those rides or we created media specific to that ride,” says Machamer. “That ride system might exist somewhere else in the world but the experience here is one-of-a-kind.”

Within the DreamWorks Animation zone Shrek, Kung Fu Panda, How To Train Your Dragon and Madagascar are the stars, brought to life in an immersive, all-indoor environment. Elsewhere Hotel Transylvania, Ghostbusters, The Smurfs and The Hunger Games provide all the entertainment.

A short distance away is Bollywood Parks Dubai with its cinematic rides, vibrant entertainment and the 856-seater Rajmahal Theatre, home to a Broadway-style, Bollywood-themed show called Jaan-e-Jigaar. 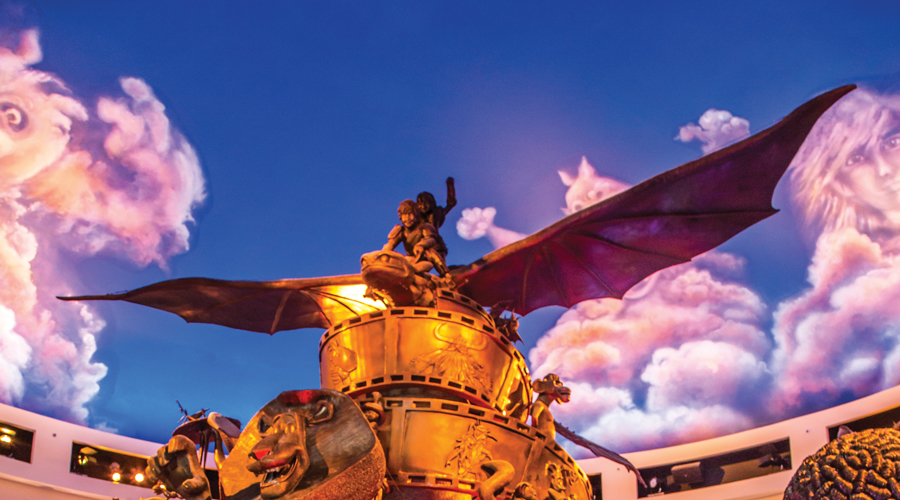 “When I first joined I knew virtually nothing about Bollywood,” says Machamer. “So one of the first things I did was watch all the movies. I was travelling to Los Angeles quite a bit working with creative and the movie studios so I’d always watch the films and get to understand the stars.

“I didn’t really have an appreciation or understanding of how big that industry is.”

“We took all the big films from the Bollywood industry and the stars of those films, such as Shah Rukh Khan and Salman Khan and the films like Krrish and other classics such as Sholay.

“The recipe for creating the movie park was similar to that of Motiongate, just based on Bollywood instead of Hollywood.”

“I was the first Legoland Dubai employee,” he says. “The first time I came here at the end of 2013 it was still all sand. They had started to do the infrastructure work but it still looked like a desert. What we were trying to do was create interactive attractions and activities for children where they could influence the experience and that’s what we did. So it’s not only passively sitting in a rollercoaster or on a carousel, it’s about the Lego experience and children actually experiencing what they play with in their living rooms, only in life-size.

“I grew up with Lego as a kid, so for me it’s a dream job working with a company where you identify with their values. It’s a toy, it’s fun but it has educational value as well and if you can bring enjoyment to families with children and see them having fun, then that’s reward enough.”